The Old Folks Home: First Base This Decade

Share All sharing options for: The Old Folks Home: First Base This Decade 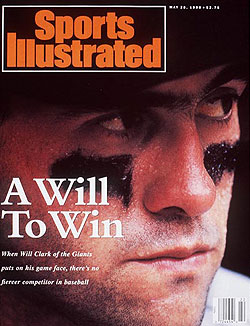 First base often times is a place where you can "hide" a guy that can hit but doesn't have much athleticism. There are exceptions; Mark Teixeira and Albert Pujols are both outstanding first basemen in every way, as is Colorado's Todd Helton. There have been many athletic guys positioned at first for various reasons. Steve Garvey threw like my grandma, for instance.

This decade, the Orioles have had all sorts of problems. The losing started in 1998, but it has truly cemented itself in the 2000s. A couple losing years happen to any franchise, even the great ones. But the Orioles not only haven't had a winning season this decade, they haven't come close.

One of the issues has been first base. Traditionally you get a guy that can rake over there. The Orioles have instead chosen to fill the position with old fogies, has-beens and PR disasters.

Will Clark is one of my favorite players, but when the Orioles signed him after the 1998 season to replace Rafael Palmeiro, we didn't get the guy who'd been such a phenomenal and tremendously overlooked hitter. We got a broken down shell of the guy Will Clark used to be in San Francisco and Texas.

Clark was entering his age 35 season when the Orioles signed him. He had been healthy in 1998, but prior to that the red flags were everywhere. We all knew he wasn't the guy he was in his early Giants days, but we didn't even get the guy that played in Texas:

Note of course that 1994 (114 games) and 1995 (144 games) were strike-shortened seasons. He was healthy in those seasons, but since they were short 38 or 21 games, it is what it is. '94 particularly might have been a different story with the extra games.

When Clark got traded, the team handed over the first base job to Chris Richard, who did not come over from the Cardinals in the Clark trade, which netted us Jose Leon on July 31, 2000. Richard actually was acquired on July 29, 2000 with Mike Nussbeck in exchange for Mike Timlin. We really did all we could to help St. Louis out in 2000.

Richard had a power surge in his end-of-season audition, slugging .563 with 13 homers in 199 at-bats. He was the Opening Day DH in 2001 and struggled to stay in the lineup. A couple years later he had been traded to Colorado for Jack Cust, whose glove needs glue in it to be playable and never got a fair shake with the O's. Shortly after that he was out of the league. 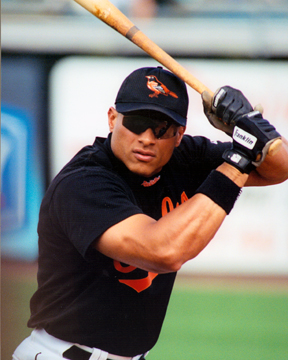 Who was the Opening Day first baseman for the 2001 O's? David Segui, of course, the 34-year old ex-Oriole we signed to a four-year deal.

The Segui deal is one of the overlooked bonehead moves of the decade. After the Clark health fiasco and the Albert Belle mess, the Orioles picked up Segui for about $7 million per season. Segui had played in 140+ games exactly three times in 11 years, while bouncing through eight organizations (Orioles, Mets, Expos, Mariners, Blue Jays, Rangers and Indians).

Yeah, he could hit some. But he was also 34 years old with a spotty history.

With Segui a non-entity and Richard a bust, Jeff Conine was the regular first baseman from 2001-03. Conine was barely passable as an everyday first baseman, and that wasn't his fault. After all, that was supposed to be Mr. Reliable, David Segui. He was pretty good in 2001, banged up and not very effective in 2002, and traded in 2003.

In '02, Jay Gibbons got to play some first base, and he broke out with a 28-homer season. We might give Gibby some guff now, but he was a genuinely nice Rule 5 pickup by the Orioles. He did more than you can expect of any Rule 5 guy, really. Gibbons was bad in the outfield and actually worse at first base, so he never stuck. He was another guy who got hurt a lot, anyway.

In true Oriole fashion, the team refused to learn from the Clark and Segui mistakes and signed 39-year old Rafael Palmeiro to play first base in 2004, part of the influx of new offensive talent with Miguel Tejada and Javy Lopez. This was a crummy idea from day one that got worse as Palmeiro embarrassed himself, the organization, and baseball in general in 2005. Here's why it was a bad idea from day one, though. Let's say Palmeiro really broke out in 1991 as an offensive star:

The Orioles made the mistake of assuming that the home run totals meant that Palmeiro wasn't declining as he sauntered merrily toward 40. They were very, very wrong, and his final two seasons in Baltimore hashed that out: 108 OPS+ both years, with home run totals of 23 and 18, and the 23 took a bit of a late-season surge. Let's not even really go into THE GIANT STEROIDS ISSUE.

When Palmeiro was quietly released and all but taken out back and shot as far as the Orioles are concerned, what did they do next?

Of course! They signed 34-year old Kevin Millar! Now I love Kevbo, I really do. I'll always remember him fondly because unlike the other old farts we're talking about here, he went out and played his best. He didn't get hurt, he didn't drag everyone's name through the mud. He just played. He was a leader on and off the field and I enjoyed him. 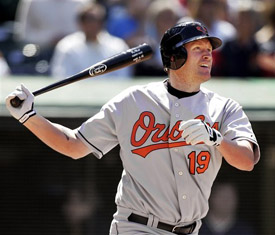 Now he's gone. He should be, and he is. They made the right call. And with no one in line -- not one single viable first base prospect in the system, after all these years -- the job goes to Aubrey Huff, who turned 32 in December.

The good news is that they didn't go out and sign Huff. They did that a couple years ago when it didn't make any sense. The fact that Huff had a remarkably good 2008 at the plate does not retroactively make his signing in the 2006-07 offseason a better one. It didn't make sense and was the product of a front office that didn't know what the hell they were doing and were making last gasp attempts at a "competitive" team by luring Huff and Jay Payton, who were both veterans on the decline.

Huff was great last year. He's unlikely to repeat. What's more bothersome is the fact that there STILL is not a viable first base prospect in the system. Brandon Snyder's glove is terrible and he's got a lot of hitting to do to make up ground. Billy Rowell was thought to likely be a first baseman and he's been brutal so far in the minors. Both have time. Both are young. I agree with that. And sure, maybe Nolan Reimold could play first base and that fixes everything, but he's been an outfielder his entire career and has had injury troubles of his own.

This is a position that has been neglected. Third base has the same problem, but thankfully Melvin Mora has been able to reliably man the hot corner for the last five years.

First base is the Oriole position of Steady Eddie, Boog and Gentleman Jim, the first big-time Oriole bopper. Between the reigns of Powell and Murray there was Lee May, who was sort of like if you took this decade of Oriole first baseman and boiled it down into one guy. But this has gone on a lot longer, and there ain't no Eddie Murray on his way here.

To be fair, the team did try their best to sign Mark Teixeira this offseason. And this whole first base black hole is one of the reasons that it did make sense. There is nobody that's going to be ready to take control of first base in the foreseeable future. Huff might be fine, but given his age, he's a stop-gap. What happens when his contract's up? Who then? Carlos Delgado?

It's an area that needs to be addressed in the coming drafts, or they might have to look around for a blocked first base guy in someone else's system. Clearly, free agency has not been kind to the Orioles as far as first basemen go.