The Battle for 25th Man

Share All sharing options for: The Battle for 25th Man 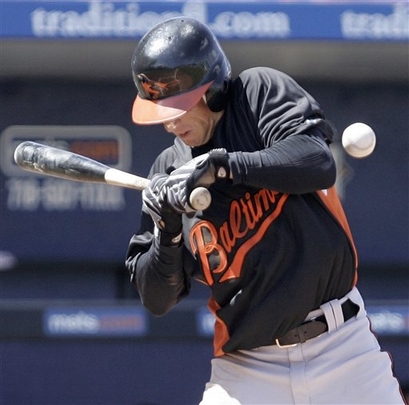 One of the first things I ever did on this site was give way too much of a crap about the Chris Gomez v. Enrique Wilson utility infielder battle of Spring Training 2005. Gomez won. All was right with the world. Gomez then hit .279/.359/.342 in 2005 and poked even more singles around in spot duty the next two seasons, and now he's back in camp, but he's really too old now and his numbers in '08 with the Pirates (.273/.322/.333) show his usefulness fading.

Still, Enrique Wilson got 22 ABs with the Cubs in 2005 and never played again.

This spring it's not really a battle. There's a super sub role open with the team, and though the O's traded for Ryan Freel who fills the role nicely, there's also Jolbert Cabrera -- who was once shot in the buttocks -- and I think he deserves a long look.

Freel's going to play a lot if they can help it. He adds plenty to the team in theory. He's got plate discipline, which makes him a viable pinch-hitter even if his contact abilities have slipped and his power has become basically negligible. He runs really well. He can handle center if he has to, plus the corner OF spots and second base. He's probably a lesser shortstop than Cabrera, who's probably not as good a CF as Freel, although we also have Pie if Jones goes down or whatever, and Pie might be the best center fielder on the team. Freel is also injury-prone and has played in 77 and 48 games the last two years.

Cabrera isn't as good a base-stealer as Freel, but he's not a slow runner and can be used just for extra wheels in a tight situation, same as Freel likely will be at several times this year should he stay healthy.

I know Freel came over in trade for Fat Ramon Hernandez and Cabrera is just a spring training scrub for all intents and purposes. If Freel is healthy, he's the guy. But here's what I'm actually more intrigued by: Does Jolbert Cabrera have a place on this team sometime in 2009?

Assume the Birds go north with 13 pitchers and 12 position players. We know we'll have:

C: ZAUN + one, probably Robby Hammock, who can play other positions

That would leave one open spot. It'll be Freel. But should he come up lame, Cabrera seems like a guy that would fit in. He can play a lot of positions, including a better short than Freel, and Izturis is going to have days he has to sit, or he's going to have times where he'll need to be hit for late in a tight game.

I'd rather have Freel, with Wigginton also offering some level of positional flexibility (as well as Hammock) than see Cabrera over Freel right off, and with the way Gomez is hitting (.095/.269/.143) he's well out, too. Donnie Murphy isn't doing anything, either.

It's simply food for thought with little going on. The battle isn't much since Freel is all but guaranteed, but if (when?) Freel goes down, who comes up?