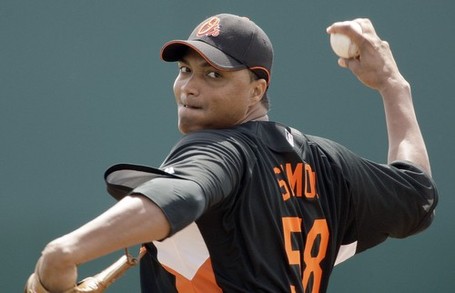 "He's a horse. He's a big guy and he keeps going right at you," Orioles manager Dave Trembley said of Simon. "He had a nice outing."

Simon has now thrown six scoreless innings in two spring games, forcing himself into a rotation scrum that includes at least eight others vying for three slots.

Usually I'd say we shouldn't be wasting time considering Alfredo Simon, but that's sort of the spirit of the rotation battle. I still like the David Pauley pickup, but heaven knows he's not doing worth a damn this spring. Guthrie and Uehara are the only guys set for the rotation. Simon should be given every chance the other guys are being given. Who knows? Maybe some nice sleeper action. Maybe he stinks. Who does it hurt if he earns his way in over another guy who might be a sleeper and might stink?