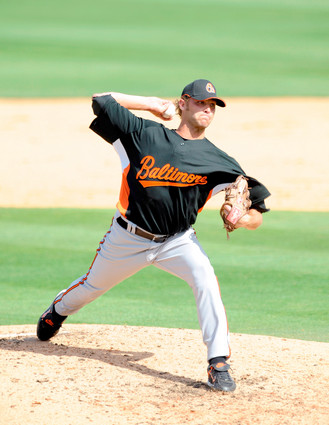 I'm rooting for Hayden Penn. I honestly don't know what to think of him anymore, but I know that I'm rooting for him. Not just because he's an Oriole, but because he, at one point, was regarded as one of the best prospects in the Orioles system. Whether that's a praise of his talent or an indictment of the Orioles system as it was a few years ago, I don't know. I do know that he hasn't been given a fair shake between the normal injuries (shoulder and elbow issues) and ridiculous ones (impaled by a bat shard, appendicitis, tripping while carrying a box down the stairs). I know that despite the fact that he seems like he's been around forever, he's just 24 years old.

Penn is out of options. If he can't prove this spring that he belongs, these might be his last days with the team. He could pass through waivers, but that's certainly not guaranteed. Personally, unless he totally self destructs prior to Opening Day, I'd love to see him on the team. Even if he's not quite as successful as some of the other guys, he is still preferable to Mark Hedrickson or Danys Baez. Those guys have no future with the O's. Hayden Penn could, if he can get it together.

The Orioles and their fans are waiting eagerly for the time when Matusz, Tillman, Arrieta, and the rest of the young pitchers are ready to come up and make a difference. Mark Hendrickson, Adam Eaton, and the other pitchers of that ilk are nothing more than placeholders (thank goodness). But if a younger guy like Hayden Penn can earn a place in the rotation and have any success at all, that is better for the future of this team. Sadly, the odds are that at least one of the big 3 won't pan out and if Penn can be serviceable, even at the back of the rotation, it will only mean good things for the team.

I'm not holding my breath. Penn has never had any success in the majors and his recent minor league statistics are nothing to write home about. So far this spring, Penn has pitched just two official innings and he looked pretty good doing so. I just shook my head when reading that despite pitching three strong innings today in an instrasquad game, he appears to have a blister or fingernail problem. Knowing his luck that'll keep him injured most of the year. Or maybe not. Maybe this is the year he finally stays healthy.

What do you guys think? Does he have a chance? Will he stay healty? Even if he does stay healthy, will he be any good? I know one thing, I believe in Hayden Penn enough that I put $1000 of my hard earned Camden Cash on him starting over 7 games for the Orioles this year.