Share All sharing options for: David Ginsburg on George Sherrill 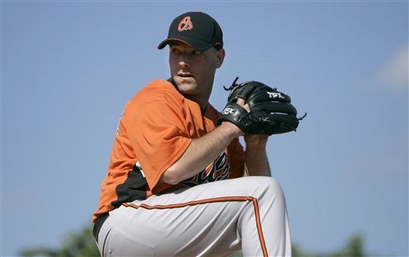 George Sherrill had his finest season in the major leagues last year, yet the Baltimore Orioles closer was disappointed in his performance despite 31 saves.

In other words: "George Sherrill was allowed to save games in the major leagues last year and was the mercy pick as Orioles representative in the All-Star game, so it was his finest season."

On a sort of related note, I finally sat through the O's feature on "30 Clubs in 30 Days," and I watched the Blue Jays last night, too. The MLB Network is cool and all, but their studio work is just horrendous. They make John Kruk and Steve Phillips look good. They spend most of their time discussing strategy for Little League baseball. "Wait for your pitch! Then drive it! That's what Cito Gaston is all about." Awesome. I also hear the Blue Jays would like Alex Rios to hit more home runs.

It's like when Ryne Sandberg worked for Yahoo! Sports and decided that Sammy Sosa was the best player on the Orioles prior to the 2005 season, and that nobody knew who anyone was besides Sosa and Tejada.