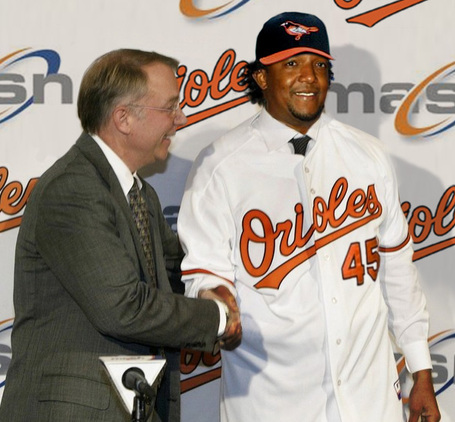 Following another dismal outing today by one of his regular starters, the Baltimore Orioles'  general manager took a drastic step to shore up his young team's pitching, signing free agent Pedro Martinez to a one-year deal just before midnight.

Terms of the contract were unannounced, but Martinez reportedly had been seeking an annual salary in the range of $3 million. One Warehouse official, on condition of anonymity, said the contract was heavily incentive-laden, with bonuses for reaching 100, 150, and 180 innings.

The news caught the baseball world by surprise, as there had been rumors for weeks that Martinez might not land anywhere, and if he did, it would be with either the New York Mets or the Los Angeles Dodgers. For the Mets last year, Martinez went 5-6 with a 5.61 ERA in 20 appearances and finished the year on the disabled list.

Orioles skipper Dave Trembley said he had not yet determined where Martinez would slot into the rotation. Current starter Jeremy Guthrie could not be reached for comment, but his Twitter feed read, "Pedro is an ace in any clubhouse", indicating there will be little friction regarding the rotation order following the surprise signing.

In a humorous turn of events, the announcement was delayed by nearly an hour because Martinez was tracking down and bargaining with relief pitcher Dennis Sarfate to wear uniform number 45, the number Martinez had worn in previous stints with the Red Sox and Mets. The terms the two reached were undisclosed, but Martinez wore the number at his press conference with MacPhail. (It is unknown what number Sarfate will now choose to wear; his college number, #52 at Arizona State, is worn by closer George Sherrill.)

With opening day less than a week away, MacPhail said that recent poor performances by several candidates for the starting rotation had forced his hand, and that, "...[T]his is the time of year these types of moves have to be made. Today is the first of April. If we didn't act now, some people might have called us foolhardy."

It's gonna be one rollercoaster of a year, O's fans.