The rotation is going to be horrible, so let's talk some more about it...

Share All sharing options for: The rotation is going to be horrible, so let's talk some more about it...

...that way if it's passable, we feel like we win!

Here's how Orioles pitching has done during The Losing Years:

The proof is pretty much in the pudding: This franchise's recent pitching history certainly stinks, but the last three seasons it has been worse than ever. The Leo Mazzone and Rick Kranitz teams have bottomed out, with only some pretty awful performances from the '08 Rangers, '07 Devil Rays and '06 Royals saving their bacon to any degree.

Now, there's something to be said for talent provided these coaches, yes, and that's the biggest thing. No one was getting good results out of these guys. But it's not like those Ray Miller teams were lighting it up out there; the fact that the '99 team finished fourth is a miracle and a reflection of the league at the time, all 'roided up and crazy. You look back on those guys (outside of Mussina, who had an excellent season) and there's not a lot more talent than what's been handed these last three squads.

It won't be fixed any time soon. The days of Matusz, Tillman and Arrieta (and maybe Bergesen and Erbe, etc.) are still pretty far off. This season...

Obviously strange things happen, but it is very rare indeed that anything as strange as Guthrie, Uehara, Simon, Hendrickson and Eaton being successful happens. The Hardball Times projected the Orioles to have the worst staff in the league by far this season, and this was pre-Eaton and pre-Uehara and even pre-Hendo, and freaking Alfredo Simon has come out of nowhere to win a job the team couldn't hand to Hayden Penn with a clear conscience.

More about Alfredo. Here are his VORP numbers since 2006:

In layman's terms, he has sucked, no matter where the ball was being played. A-ball, AAA ball in the PCL, MLB, Mexico. 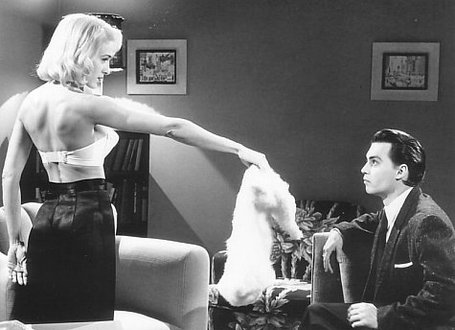 In some ways discussing the rotation like this reminds me of Sarah Jessica Parker as Dolores Fuller in Ed Wood, when at the end of one of Ed's bizarre wrap parties, with everyone hooting and hollering and having a great time, she suddenly bursts out with, "You people are insane! You're wasting your lives making s***! Nobody cares! These movies...ARE TERRIBLE!"

See, I don't think Ed and the gang were wasting their time, and I don't think we're wasting our time talking about this crummy predicament. But it's undeniable that his movies and this rotation are crap and that outside of us weirdos, nobody cares. Frankly, it's a little peculiar that we're as invested as we are in guys like Alfredo Simon and Adam Eaton. Sad, even. But that's the hand we were dealt. Ed Wood wanted to make movies. I want to root for the Orioles. He had no talent. I have no choice.

It also pains me to beg of everyone to not just "stay realistic," but to actually expect the worst pitching staff we've seen to date during these lousy years.

Think about how we all get by mid-July. I'm not saying we won't still drop so many game thread F-bombs that someone really ought to do something about it, but maybe the harsh impact this team will have on your mental well-being will be lessened.

Or completely ignore my advice, get psyched for Kojimania, and be like the many GMs that have been tricked by Adam Eaton in the past.