Share All sharing options for: Kalas and Fidrych: Two of two kinds 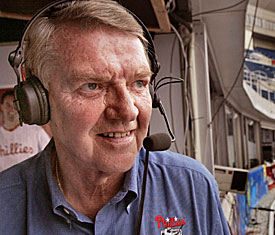 The recent tragic loss of 22-year old Nick Adenhart of the Los Angeles Angels was more than tough enough for the baseball community. Today, two more were lost as legendary Phillies broadcaster Harry Kalas and ex-Tigers phenom Mark "The Bird" Fidrych both died.

The 73-year old Kalas passed out in the broadcast booth prior to the Phillies game against the Nationals today. He was rushed to the hospital, but did not survive. Kalas had been the voice of the Phillies since 1971. It is unlikely in this day and age that the Phillies will ever again have such a long-running, distinctive play-by-play voice. Kalas is a member of a fraternity that is thinning all the time. The old game-callers are getting fewer and fewer.

One strike away; nothing-and-two, the count to Hinske. Fans on the their feet; rally towels are being waved. Brad Lidge stretches. The 0-2 pitch — swing and a miss, struck him out! The Philadelphia Phillies are 2008 World Champions of baseball! Brad Lidge does it again, and stays perfect for the 2008 season! 48-for-48 in save opportunities, and watch the city celebrate! Don't let the 48-hour wait diminish the euphoria of this moment, and the celebration. And it has been 28 years since the Phillies have enjoyed a World Championship; 25 years in this city with a team that has enjoyed a World Championship, and the fans are ready to celebrate. What a night!

Bouncing ball to Chase Utley, this should be the game, Chase throws him out and that will be it as the Phil's win 2 out of 3 here at Coors Field, coming back to take this one by a score of 7 to 5.

To say Kalas will be missed by Phils fans is an understatement. Fans are sharing their comments over at The Good Phight. 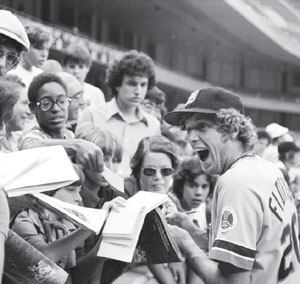 Sadly, on the exact same day, 54-year old Mark Fidrych was found dead on his farm in Massachusetts. He is believed to have died working on a 10-wheel dump truck.

Fidrych, of course, was the 1976 AL Rookie of the Year for the Detroit Tigers, going 19-9 with a 2.34 ERA and 24 complete games. He finished second to Jim Palmer in the Cy Young voting that year.

Fidrych was famous for his huge personality. He talked to the ball, was maybe more animated than anyone in MLB history, and was pretty well loved by just about everyone. I was negative-six years old in '76, but just watching clips of Fidrych over the years, he seemed like a 21-year old kid having the time of his life and showing it as much as he possibly could.

"The Bird" never had another good season, suffering through injuries. His final game came on October 1, 1980. He tried to make a comeback with the Red Sox, but never got out of the minor leagues.

I dare say there is no player ever that really did so little (29-19 career, 412 IP) that has been so memorable, so beloved and such an enduring star.

Farewell to both men, neither soon to be forgotten.