Jackie Robinson: 62 years since the color barrier was broken

Share All sharing options for: Jackie Robinson: 62 years since the color barrier was broken

Jackie Robinson Day is one of the few "PR" things that baseball has gotten right over the Bud Selig years, and with the players all wearing No. 42 around the entire league, the love will be more widespread than ever.

I won't go on and on about Jackie Robinson, because we all know the story. But perhaps a slight bit ignored is how good of a baseball player he was. He played 10 seasons in the majors, hitting .311/.409/.474, and he was an amazing glove man, too. He was a fierce competitor ("Above anything else, I hate to lose," he once said) and he was a man with natural talent rivaled by very few, and what he dealt with on a daily basis, especially early in his MLB career, would've broken a whole lot of good and even great players. The man could flat-out play. He was born to play baseball.

MLB Network will be running a day-long tribute to Jackie, too. 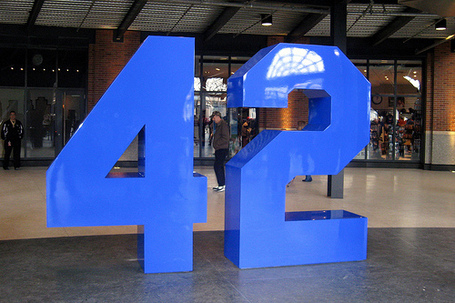