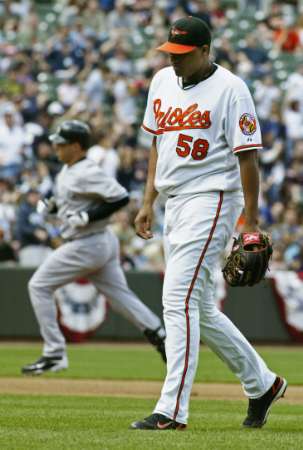 No. 3 starting pitcher Alfredo Simon told reporters today that he will undergo elbow surgery that figures to cost him the remainder of the 2009 season.

He came up sore early in his second start and was diagnosed as having "degenerative tissue" in his pitching elbow.

Now, in the grand scheme of things, this isn't a huge loss.  However, in the NOW scheme of things, this isn't exactly good news.  Simon was not going to be part of the future.  His success this Spring seemed to come despite less-than-impressive perhipherals & ran completely contrary to his track record.  But can anyone say they'd rather have Hendrickson or Eaton on the mound than hoping to catch lightning in a bottle with Simon?

The worst news for Simon is the timing.  This could have been his shot to catch on as kind of a budding yeomanlike pitcher: one of those guys who hops from team to team, never really catching on anywhere, but making a good living out of it.  Instead, his audition for that job has been cut short & may be permanently ended.  I can't think of too many other teams with situations like ours that would have afforded him the opportunity to be a relatively bright spot in an otherwise miserable rotation.  By missing out now, his return will coincide with the arrival of better, more talented cornerstones of our youth pitching movement.

Or, hell, he could end up in the bullpen.  It's not like anyone out there has guaranteed job security.