Tonight was MASN Orioles Blogger Night at Camden Yards and I was joined by Duck and Jonny Pops in representing Camden Chat at the event. Other Camden Chatters in attendance were Brotz13 (Orioles Card "O" the Day, NumerOlogy), thewaywardO (The Wayward Oriole), and RoarFrom34Blog (Roar From 34). Also present were representatives from The Loss Column, Oriole Magic, Dempsey's Army, Baltimore Sports and Life, and Baltimore Sports Report. The whole group was treated to a lovely evening courtesy of MASN, especially Todd Webster and Kristen Hudak. So if you guys are checking in on us, thanks again!

The evening began when Duck and I met at Pickles for a pre-game beer before heading over to the home plate gate where we met Jonny Pops, Brotz13, and a number of other bloggers. Once inside the doors we were all issued press passes. I found the entire thing to be terribly exciting. We whooshed up the elevators to the press level where we briefly got to meet Amber Theoharris. She was on her way down to the field so couldn't talk for long. Jonny Pops suggested she stop by later and do a story on us, but she politely declined (hee). 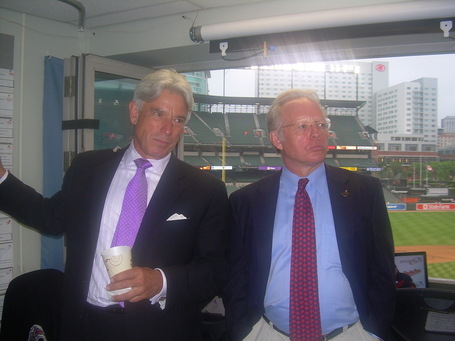 Gary Thorne and Buck Martinez spent a few minutes detailing their day and how they prepare for the game, including talking to players on the field, going over the game notes, the usual. Gary also joked that when there's a good hockey game on they always keep it on during the game. As you all know, Gary has that great voice, and it was even more booming in person. Those of you who pay attention to Buck when he's on camera know that he's always giving that twinkly winky eye to the camera, and as I was in his line of vision I felt like he was giving it directly to me the entire time. The question was asked if Buck and Gary read any sports blogs, and they said that they didn't, since between all of their various jobs they just don't have the time. So feel free to continue saying whatever you like about Buck and Gary here, they won't ever know :-)

After our meet and greet with Buck and Gary we were led down to the bullpen area where we watched a bit of Orioles Xtra with Jim Hunter and Rick Dempsey, then we went to the MASN Suites where we'd watch what turned out to be a fine Orioles game.

I'd never been in a suite at Camden Yards before and I felt especially fancy. There was plenty of good food, a refrigerator stocked with beer, soda, and water, AND celebrity visitors! Gregg Zaun had his entourage there, and Rick Dempsey spent a good deal of the game in the suite with us. Duck was especially geeked to get his picture taken with the Demper. Jim Hunter also stopped by for a bit and Al Bumbry was hanging around as well. The entire thing was just so...cool. Perhaps the greatest celebrity run in was when Roch Kubatko stopped in and Duck introduced himself as being from Camden Chat. I'll let Duck tell the story as I wasn't there when it happened, but the bottom line is Roch wasn't amused about the time that a story was written about Roch challenging a Camden Chatter to fisticuffs. Sadly I did not even see Roch as I was outside cheering on the O's.

We also got to visit the MASN HD truck where a hundred monitors and like twenty people were working super hard recording the game, deciding what gets shown, putting together highlight packages, and tracking pitches. Honestly I didn't understand half of what was going on in there but it looked very important.

Perhaps the finest part of my evening was just getting to sit around and shoot the breeze with my fellow Camden Chatters. We all interact on this blog on a regular basis, but meeting in person really gives you a chance to get to know the people behind the screen names. It was a real treat to meet the guys.

Also, I'd be remiss if I didn't get MASN the proper credit on this evening. We've had many discussions here about the changing face of media, how the internet changes things, and how blogs often aren't taken as seriously as they should be. By reaching out to the Orioles online community, MASN is proving that they do get it.  They showed great respect for us and our work, and for that I'm very thankful. 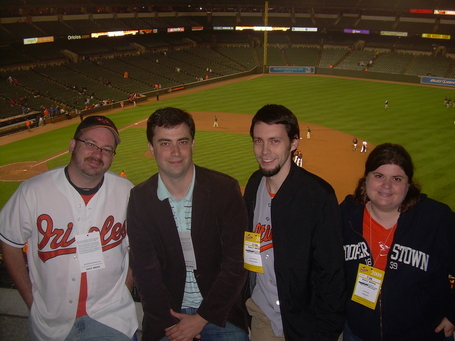 Duck, Jonny Pops, Brotz13 and I bask in the O's victory.