Share All sharing options for: O's 5, Mets 4: Baseball is fun!

Wow. Where to start. You know, there are times when I think we all say, "Why do we bother?" We suffer through base running mistakes, defensive miscues, pitchers who can't pitch, hitters who can't hit. It gets hard to watch. We curse them and turn off the TV, we complain about the batting order and the manager and the trades that didn't get made, and anything else we can think of. 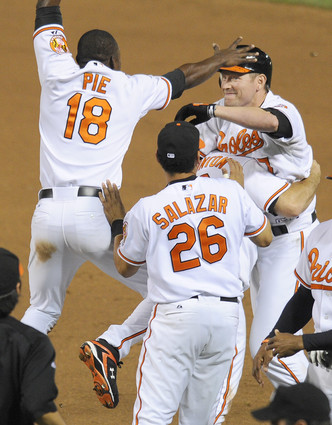 And then there is a game like tonight, and I remember why I love baseball, and why I love the Orioles. These are not the same old Orioles, and I'm not just on a post game high. This team is going to lose games, they're going to keep making mistakes. Melvin Mora will continue to bat 5th. But damn if this team isn't fun. They have a personality. Matt Wieters, Nolan Reimold, Adam Jones, Aubrey freaking Huff, even Felix Pie.

If you didn't watch this game, sad day for you.

His final line doesn't really show it, but Jason Berken pitched a hell of a game. His pitches looked really good, especially his breaking stuff. He gave up just one hit through the first 5 innings, and got into trouble in the 6th when the Mets scored two runs on four hits. Despite his troubles he came back out for the 7th and started off well, getting out the first two batters before giving up a single and a double and two runs (one scored after he left the game). He fell apart there a bit in the end, but he looked so good for the first 5 innings that I am very satisfied with his outing. Jason Berken is never going to be a premiere pitcher, but if he can look for most the games the way he did tonight, I'll be happy.

Danys Baez did allow the runner he inherited from Berken to score, but he still looked decent. He wasn't as sharp as he has been, but he only allowed one hit in 1.1 innings, and Matt Albers pitched the 9th without incident.

For the first part of this game, it looked like the O's offense was going to roll over once again. They took a 1-0 lead in the 3rd inning on Robert Andino's first home run of the year. How about that Robert Andino? He does it with the glove, he does it with the bat, he does it all! They had the opportunity for a big inning in the fifth. Ty Wigginton got lucky on a ground ball that would have rolled foul if Livan Hernandez hadn't picked it up and dropped it and Matt Wieters lined a single to right. After a failed bunt by Andino that got Wiggy thrown out at third, Brian Roberts lined a double down the left field line to score Wieters, followed by an Adam Jones walk. Markakis and Huff couldn't get the job done, though, and they settled for just the one run. Being the Orioles fan that I am, I figured that was the chance, the boys blew it, and the O's would end up losing.

I was wrong. Very wrong.

The O's added one run in the 8th on a Luke Scott ground out, which brings us to the bottom of the 9th.

Matt Wieters led off the 9th against Frankie Rodriguez. If you remember Tuesday's game, Wieters looked totally over matched against the Mets closer, striking out quickly. Not so tonight. He lined a double to the gap in left-center, just barely beating the throw to second. Felix Pie came in to run for him and Nolan Reimold stepped to the plate, pinch hitting for Andino. Nolan didn't let us down as he drew a five pitch walk, and Brian Roberts attempted to do something that he never does, bunt. His bunt wasn't horrible, but it wasn't great. Santos threw to third, but speedy Felix Pie just beat the throw. David Wright argued and on the replay it honestly looked like it could go either way. Felix celebrated adorably at third base with some boisterious hand claps. With that, the bases were loaded with zero outs. Zero outs!

Adam Jones, who's been coming back to earth after his monstrous start to the season, showed great patience at the plate. Of course, it didn't hurt that K-Rod just didn't have his usual stuff. With the bases loaded in the bottom of the 9th, Adam Jones took a walk. Pie jogged in from first with the tying run. Nick Markakis, who looked like slumpy Nick again tonight, struck out for the first out. Aubrey Huff, clearly not interested in extra innings that might keep him from going to the club later, jumped on the first pitch and hit the game winning single to right field. Aubrey also hilariously conducted his post game interview with Amber turned towards the dugout so that he wouldn't get surprised with a pie (not Felix). He's a wily veteran!

O's win! O's win! What an exciting game. And we get to do it all again tomorrow. I love baseball!