Orioles 11, Red Sox 10: Greatest Comeback in Franchise History (you can look it up).

Share All sharing options for: Orioles 11, Red Sox 10: Greatest Comeback in Franchise History (you can look it up).

You want to hear something funny? In the 2nd inning of this game, with the Orioles down 4-0, I had myself convinced that John Smoltz was going to throw a no hitter. I really believed it. I had visions of John Kruk warbling on about John Smoltz's huge comeback as a Red Sox and the Orioles looking the way we all expect them to look in situations such as these. Well, Robert Andino ensured that the O's wouldn't be no hit with a single in the third, and Felix Pie ensure they wouldn't be shut out with an RBI triple. It was of little consolation, however, since Rich Hill was just awful tonight. Absolutely putrid. A Kevin Youkilis home run in the first, a Dustin Pedroia two run double in the 2nd, and let's not even talk about the 4th inning, when the Red Sox scored 5 runs to go ahead 9-1.

I was just about to turn off this sorry excuse for a baseball game and get to the laundry I've been neglecting when the rains came and washed away the stink of the Orioles. After over an hour of rain, the game recommenced, and our lives were changed. Justin Masterson replaced John Smoltz and at first, it looked like more of the same. He retired the first six batters he faced until the 8th inning.

And that's when something magic happened.

Aubrey Huff led off with a single. Simple enough. At that point the O's were down 10-1 and I was barely even paying attention to the game. Follow that with a single by Nolan Reimold and an Luke Scott double off the scoreboard (three feet to the left and it would have been a HR) and suddenly it was 10-2. I yawned. Oscar Salazar stepped up to the plate, pinch hitting for Melvin Mora. Oscar hasn't gotten many chances since being called up, but he made the most of it by absolutely crushing the baseball to left field. It landed in the back of the left field seats and the O's were down 10-5, and they weren't done. With two outs and Robert Andino at 2nd, Felix Pie singled in the 6th run. Nick Markakis followed with a single of his own and with runners on first and third, Aubrey Huff lined a ball towards second. I thought it would be a base hit, but Pedroia timed his leap perfectly and stabbed it out of the air.

The Orioles had made the score respectable and were back in the game, but five more runs in two innings against the best bullpen in baseball seemed like a steep order. Do you know what the Orioles offense said to that? They said, "Pshaw, we don't even need two innings. We'll do it in one."

Leading off the 8th was Nolan Reimold, who started things off with a single. The scoreboard again proved to be Luke Scott's nemesis. This time he launched what I thought for sure was a home run, but it hit off the top of the scoreboard and bounced back into play for a double, putting runners and 2nd and 3rd. Probably all for the best, since home runs are known to kill rallies. Oscar Salazar followed his monster home run up with a "single" to the catcher. Actually it was the catcher picking up the ball and just standing there. Who knows why. Who cares why? The bases were loaded with zero outs for young Matt Wieters, who served a soft single into left field to score Nolan Reimold. Ty Wigginton, pinch hitting for Robert Andino, sent a ball to deep right. I thought for a moment it might get out, but instead it was caught on the warning track. Luke Scott raced home with the 8th run of the night. Brian Roberts, in an 0-18 funk, lined a single past a diving Youkilis at third to score Salazar, and just like that the Orioles were down by only one run.

Terry Francona had seen enough and brought in Jonathan Papelbon to attempt a 5 out save. Papelbon struck out Felix Pie for the second out, but he wouldn't be so lucky with Nick Markakis. With Jeremy Guthrie on 2nd (running for Wieters) and Brian Roberts on first, Nick hit a shot into the gap. Guts and Brian raced around the bases to score the tying and go ahead runs.

Enter George Sherrill, who has been great this year, but had never pitched in a game that had unfolded quite like this. He was set to face three right handed batters, and chose this night to make things interesting in old school Georgie style. Number 9 hitter Jeff Bailey, just called up to replace injured Mike Lowell on the roster, led off with a single. Julio Lugo struck out and Dustin Pedroia flew out to right, and only Kevin Youkilis stood between the Orioles and victory. Sherrill quickly got two strikes and what Oriole fans remained at Camden Yards after a 9 run deficit and an hour plus rain day rose to their feet...just in time for Sherrill to plunk Youk on the elbow. UGH. That moved the tying run to second base for Jason Bay, who struck out. O'S WIN! O'S WIN! Never a doubt, Georgie. Never a doubt.

See some great game related pictures below the jump. 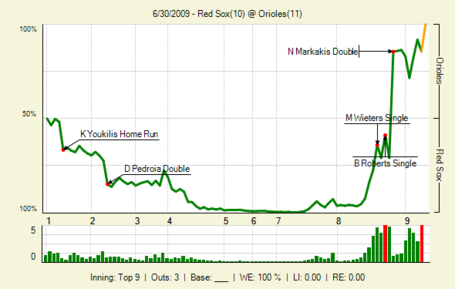 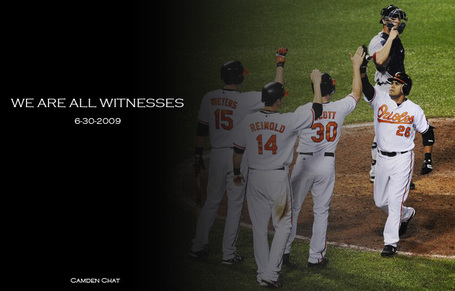 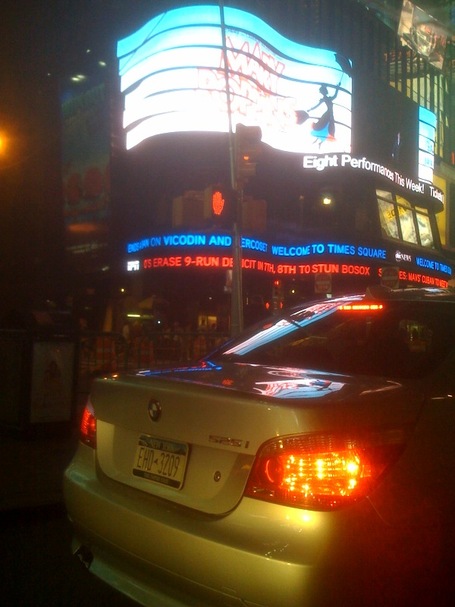 dkdc's view on the way home from work.