The outstanding Blue Jays blog, Ghostrunner on First, recently did a post examining some of the Jays' pitchers by which pitch they threw in different counts. It was a great read and got me wondering the same thing about the Orioles in 2010. I decided to focus first on Brian Matusz, because he's awesome. 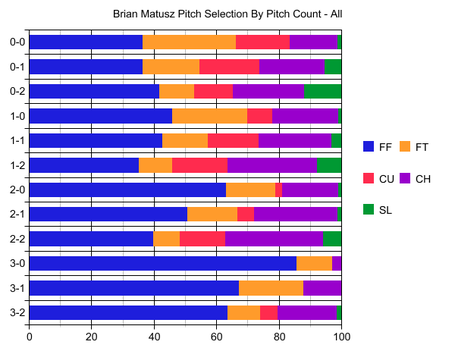 As you can see, Matusz loves his four-seam fastball. In fact, he threw it 42.6% of the time in 2010. He threw his second most common pitch, his change-up, about half as often as the four-seamer (21.2%). While the four-seam FB was his most used pitch, up until Matusz reached a three-ball count, the batter had a good chance of seeing any of four pitches.

Matusz's change-up had a whiff rate of 17.3%, well above the MLB average of 12.13%. He dialed up its usage in two-strike counts, where he threw it 224 times with a whiff rate of 19.6%. It's really just a good idea to not let Brian Matusz get two strikes against you, as batters hit just .161/.231/.495 in that situation. As you might remember from watching him, Matusz struggled with walks for a decent chunk of the season, and when he found himself in a three-ball count, batters had a .563 OBP against him (with a whopping 63 BBs in 144 PAs). He cleaned that stat up in the last two months of the season, thankfully, allowing just 16 BBs over his final 62 innings pitched.

Click through to see how Matusz pitched specifically to lefties and righties. 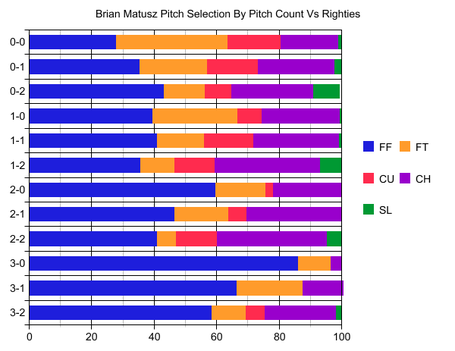 For right-handed batters, Brian Matusz used his change-up to complement his four-seamer. He threw the change-up to righties 24.7% of the time, and when the count was 0-2, 1-2, or 2-2 he used it with close to the same frequency as he did the four-seam fastball. That can't be easy on a batter, especially when he threw it for a strike 70% of the time with two strikes. 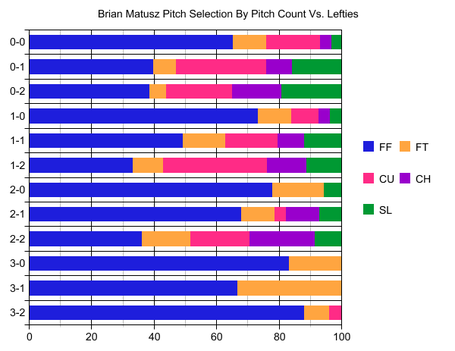 Brian Matusz threw 626 pitches to left-handed batters in 2010, and 404 of them were fastballs (337 four-seamers, 67 two-seamers). That's almost 65% total. He filled out his lefty repertoire with 115 curveballs (18.4%), 54 sliders (8.6%), and 53 change-ups (8.5%). I love his two-strike count selection, where a batter has a reasonable chance of seeing a fastball, curveball, change-up, or slider. Matusz was even more reliant on his fastball in three strike counts against lefties than he was against righties, though he was also had a much lower walk rate to lefties (6.7% to lefties vs 8.7% to righties).

All pitch data and statistics are from Texas Leaguers and Baseball Reference.