PITCHERS AND CATCHERS (And Bird Droppings)

Share All sharing options for: PITCHERS AND CATCHERS (And Bird Droppings)

Pitchers and catchers. The three most beautiful words in the English language. Today is the report date for the O's pitchers and catchers. Their first workout will be tomorrow. Soon enough the first pictures of spring training will come trickling in as Matt Wieters and his pitching staff arrive in camp along with the early bird position players.With the explosion of Twitter in the past year I'm guessing the info and pictures will be coming in more frequently than ever and I can't wait.

I can guarantee that I'll be tired of Spring Training before too long. I just get too anxious for the games to begin. But for the time being I am psyched. PITCHERS AND CATCHERS, Y'ALL. 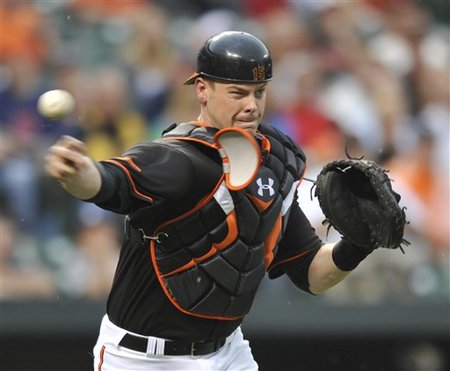 See your daily dose of links below the jump...

Now that Spring Training is here the days of sparse news items are gone. Behold your smorgasbord of links and feel the excitment!

Projecting The 2010 Orioles: Outfield | Camden Crazies
As I posted yesterday, Camden Crazies is collecting projections from as many O's fans as possible for the 2010 season. So head over there and give your best guess on Nolan Reimold, Adam Jones, Nick Markakis, Felix Pie, and Luke Scott. -Stacey

Because You Asked
Roch Kubatko answers some common questions from his commentors, complete with that trademark Roch shtick. -Stacey

Orioles Pitching Spotlight- Chris Tillman
Baltimore Sports Report takes a look at Tillman and what we can expect from him in 2010.

Self proclaimed underdog emerges as a top O's pitching prospect
Steve Melewski profiles Zach Britton, the 2009 Carolina League pitcher of the year and highly rated Orioles prospect. The more I hear about him the more excited I get for this kid. He's got a long way to go, though. -Stacey

Koji Sighting!
Koji is in Sarasota and working out. Um, that's pretty much it. -Stacey

O’s spring training: The 25 who will make it (#2)
Drew at WNST is posting daily blogs on the 25 players he predicts will make the the Opening Day roster. I know, I know, but they've been surprisingly snark free. This entry focuses on Brian Roberts and his first was about Matt Wieters. -Stacey

New spring park excites Orioles brass | orioles.com: News
The new ST home symbolizes a fresh start for an Orioles team that is ready to take a step forward. Man, I hope so. -Stacey

10 questions for O's heading into spring training - baltimoresun.com
Dan Connolly takes a look at questions the O's have going into the 2010 season focusing on Trembley's leadership, Tejada's adjustment, and more. -Stacey

Hardball’s winners and losers of the offseason - NYPOST.com
Joel Sherman lists his off season winner and losers and puts the Orioles in the winners column. -Stacey

Five Tool Tool - The Sports Blog That Loves You Back
This is random but funny. Five Tool Tool attributes the ten most commonly diagnosed mental disorders to ten different baseball fansbases; e.g., Red Sox fans are bipolar, Mets fans have Anxiety Disorder, etc. (It's funny when you click through and read it). The O's fans made the list as Alzheimers sufferers (since we all talk about 1983). -zk

Atkins steps up to the plate for Irvine | The Orange County Register
Garrett Atkins is doing his part to raise money for his childhood school system in Irvine, CA. He's donated supplies and helped raise money and filmed a PSA for the Irvine Public Schools Foundation. Good for him. -Stacey

Photos: Jeff Zrebiec projects the Orioles' roster - baltimoresun.com
Because baltimoresun.com must be hard up for page views, Jeff Zrebiec's picks for the Opening Day roster are presented in slideshow form. As in 25 photos. Way to falsely drive up the numbers for advertisers, Baltimore Sun. -duck

Initial Team Ratings for MLB 2K10 Revealed : ZergWatch
The Orioles garnered a rating of 83, which is better than 13 other MLB teams. Really, we're ranked higher than more than a dozen other MLB teams, including the Mets, even after 98 loses last year. Go O's! -duck

Dave Criscione inducted into Chautauqua County HOF - ObserverToday.com
Dave Criscione gets inducted into the Chautauqua Sports Hall of Fame in New York. Apparently, he played for the Orioles in 1977. I wondered why I'd never heard of him. Then I looked up his stats - seven games for one season. No wonder the story focuses on his high school career. Still, he's played seven more MLB games than any of us ever will. Good for you, Dave Criscione. -duck

The Schmuck Stops Here: MacPhail: View from the top
This just in from Peter Schmuck - Andy MacPhail's office at Ed Smith Stadium has a nice view. And that's why The Sun pays him the big bucks, folks. -duck

Delmarva Shorebirds announce new logos for uniforms - theshorebirds.com
The Shorebirds have totally redone their logo artwork for road and home caps. The new, fiercer looking Shorebird (if such a thing is actually possible) will be used at home, while a stylized D with a bird sticking its head out will be used on the road. -duck

Maple Ridge News - Where was Larry?
Here's how messed up Canada's torch relay was. Adam Loewen got to take part, but no one ever asked Larry Walker. Larry Walker, who's been on a Canadian Olympic baseball team, helped coach the national team twice at the WBC and once at the World Cup. Never asked. Blame Canada indeed. -duck