Covering the Orioles: Q & A with Jeff Zrebiec of The Sun

Share All sharing options for: Covering the Orioles: Q & A with Jeff Zrebiec of The Sun 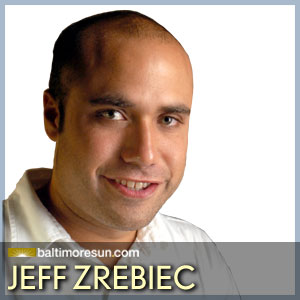 This is the first of a four-part series spotlighting members of the media covering the Orioles. For each reporter/blogger, I e-mailed a series of five questions with a promise to print their answers verbatim. I hope I asked at least some of the questions you would have.

Jeff Zrebiec is the beat reporter for the Orioles for The Sun. I asked him about the structure of his work day, just how a game story is written, and what does it take for a rumor to actually make print. Let's begin...

1) What's a typical day at Spring Training like for a reporter? How much access do you have to players and staff during the day? How much of your access is "organized" (pressers) vs. "beat reporting" (finding players on your own around the complex and around town)?

I get to the complex at about 7:45 a.m. because the clubhouse is open from 8 to 9 a.m. Once the clubhouse closes, I do a little work (transcribe interviews, plan interviews, work on stories or notebooks, etc.) for about an hour in the media trailer and then I head out to the fields to watch the workout/batting practice. The media has about a 10-minute pregame meeting with manager Dave Trembley and then after batting practice, we have another 45 minutes to an hour of clubhouse access.

After that, we usually grab lunch and go up to the pressbox in time for the first pitch. Once the game is over, we meet again with Trembley and then the clubhouse opens again to the media if you need anybody else. After that, I head back to the media trailer and write my stories for the day. Obviously, this can change depending on the game time and location, but that's generally the typical day once the Grapefruit League season starts. Aside from the group interviews with Trembley, most of the interviews are done on an individual basis.

2)  How many pieces of writing (deadline and non-deadline) do you work on in a typical day during the season?

Again this largely depends on whether the Orioles are at home or on the road, because if the Orioles are home, The Sun may have another reporter/columnist out at Camden Yards to share the load. On the road, I do a game story (which includes several variations throughout the night) and a notebook on the typical day. If there is big news, I'll usually have to write a quick story to put on the web too, that ultimately is replaced by a sidebar or notebook. As I said, at home, we split the duties - I'll do gamer and Dan Connolly will do notebook or vice versa.

3)  We often hear game stories are mostly written before the last out. What is the process for writing a game story?

They certainly are, which is why a beat reporter always appreciates a shutdown closer because when games are blown in the ninth inning, we have to do complete rewrites often in a matter of minutes. Basically, in about the sixth or seventh inning, I file what we call "running." That encompasses everything that has happened in the game up to that point, and any pregame stuff that needs to be in the gamer (injuries, lineup switches, etc.). That allows my copy desk to start editing it and setting up the story.

Then when the final out is made, or at some point in the ninth inning (blowouts allow you to get a jump on it), I'll send in the lead or the top which is usually about four to six paragraphs. The copy editors add that to the running, which I've sent in earlier, and that's usually the story that gets in the first edition of the paper. Following the game, I'll head down to the clubhouse and get quotes from Trembley and the players. I'll return to the pressbox and then write a final story with the quotes that will appear in most editions depending on length of game/whether it is west coast trip/etc.

Often times, the final story looks absolutely nothing like what I sent in for the first edition because so much happens in the later innings and what the players/manager say after the game usually is the focus.

4)  You hear something about a possible trade or move with a player. What's the process in chasing down a lead for a beat reporter? How many phone calls, who gets called, and when are you satisfied you have enough to report?

We usually need multiple sources to confirm a story in order to run with it. So if I get a tip or hear something is going down, I just start making calls and working sources. There's no set number of calls I make, just enough to make sure I have the story and I'm able to report it quickly and accurately.

I'll call the player, his agent, a teammate or friend who would probably know of the trade, the owner, GM, other high-ranking team executives. If I have multiple people confirming what I originally heard, then I'll go with it and get a quick story on the web site. There are times though where I think it's pretty safe to go with a story based on one source. If your source is the owner or GM that made the trade and you're able to attach their name to the story, you're in good shape.

5)  What are the biggest differences so far in covering the Orioles from the other teams you've covered?

That's tough question for me to answer because the Orioles are the only major league team I've been the beat reporter for, so I wouldn't be good at making a comparison. I did cover the University of Maryland basketball team for a year and I loved it, but they are two different animals. You get so much more access to the players and team officials covering baseball than you do in covering a big-time college sports program. Obviously, the main difference in covering baseball is the length of the season, the number of nights you're on deadline and the amount of travel. A lot of people ask me what do you cover in the offseason, and I kind of laugh. Often, with how popular the Hot Stove season has become to fans, the offseason is busier and more stressful than the regular season although you do get a break with the travel.