Will Adrian Gonzalez be traded? - MLB Daily Dish
Padres first baseman Adrian Gonzalez is already generating buzz on the open market. And the Orioles are being mentioned as a possible destination. So which two members of the cavalry do you give up? And yes, I know it will take more than that. -duck (The answer is none. Trade away the future for a guy who will be a FA after 2011? No thanks -Stacey)

The Schmuck Stops Here: Bill James is not impressed
Bill James doesn't think much of the Orioles pitching. -Stacey

Former Airport standout MLB's next great HR hitter? - Sports - TheState.com
In case you needed a reminder that MacPhail even got something out of trading Ramon Hernandez, here's a nice hometown profile on the Orioles' best power prospect, Brandon Waring. -zk

Orioles' Simon progressing rapidly after surgery - baltimoresun.com
Alfredo Simon is bouncing back nicely from TJ surgery. Oh, and Ed Smith season ticket holder Dick Vitale invited everyone in the Orioles' organization over to his house. -zk

Alex Rodriguez Contacted in Federal Investigation of Doctor - NYTimes.com
I am shocked, shocked, to learn that Alex Rodriguez—once again—lied about his past (this time to his own team)....as recently as two months ago. Shocked, I tell you. Shocked! -zk

D-Cab intent on sticking with White Sox | whitesox.com: News
My ex-boyfriend is being given "a very, very good opportunity to make [the White Sox]" as a relief pitcher, per Ozzie Guillen. -zk

O's Erbe looking better after change in delivery - baltimoresun.com
Brandon Erbe has spent a long time completely overhauling his delivery, and the effort is starting to pay dividends. -duck

College Baseball Hall to induct former Heel, Oriole Surhoff - baltimoresun.com
Former Orioles outfielder B.J. Surhoff was elected to the College Baseball Hall of Fame. Surhoff, a catcher at the University of North Carolina from 1983 to 1985, is the only Tar Heel to earn first-team All-America honors in back-to-back seasons. -duck

SLIGHTLY OT: Terps baseball beats blizzard - D.C. Sports Bog
New Maryland baseball coach Erik Bakich might be insane. And I mean that in a good way. The team missed a total of two days of practice through all the snow, even taking the field after shoveling themselves with outfielders playing on top of the packed drifts. Makes this UM alum proud. Photos are included with this story, and are a must-see. -duck 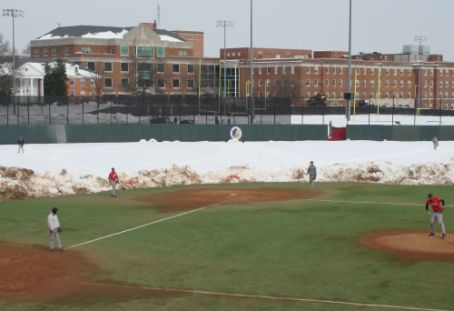