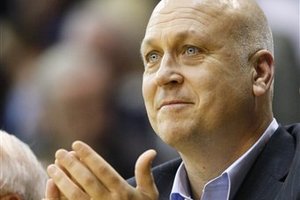 Ed. Note (zknower): This is stunning. I'm sure this will fire up Kevin Cowherd and Keith Melchior, who are bound to interpret this news as the beginning of the end for Dave Trembley.

I am reprinting the entire article, as the source website (link at bottom) keeps going down because of traffic.

The most famous Bird of them all is returning to the nest.

A source within the Baltimore Orioles organization states that Cal Ripken Jr., perennial All-Star and the face of the team for the better part of two decades, will be joining the front office later this spring "in an advisory role." A press conference has been scheduled for 3:00 p.m. on Thursday.

Ripken's hiring continues a Warehouse reorganization that began a week ago when the team replaced farm director David Stockstill with his brother John. The motives behind that move were widely questioned by local media at the time; it now seems apparent that Orioles President of Baseball Operations Andy MacPhail was paving the way for the announcement of Ripken's hiring.

The move is sure to spark discussion regarding Ripken's and the Orioles' long-term plans. Ripken has openly talked of his interest in managing in the majors, telling Bloomberg in an interview last month, "When my boy goes off to college [in 2012], if there’s a time to come back to the game, maybe that’s the time."

Hiring Ripken could be seen as the Orioles' down payment on giving him a future managerial job: a chance for him to learn how the organization works off the field, while still affording him plenty of time with his youngest son, Ryan, who is a sophomore in high school.

Another possibility is that he is being groomed for a general manager's role: there is widespread speculation that MacPhail will replace Bud Selig as baseball's commissioner when Selig steps down in 2012.

Ripken's experience following his playing career would seem to prepare him for any number of roles: he has served as an on-air studio analyst, has been active internationally (promoting baseball in China as a special envoy for the U.S. State Department in 2008), and has built a small empire of baseball clinics and minor-league teams, including the purchase of the Vero Beach Devil Rays (now the Charlotte Stone Crabs) two years ago.

Whatever the future holds, the hiring is sure to excite a devoted fan base that is desperate to see their once-proud franchise return to its winning past. There has been a concern for years that Ripken might wind up working for a rival team, perhaps even taking a job in the Orioles' backyard with the Washington Nationals.

Reached for comment, current manager Dave Trembley bristled as he emphatically stated he is unconcerned about his job security, despite the fact that in two and a half years, his teams have an overall winning percentage of .413.

"Hiring Cal is one of the smartest things this organization could have done—only a simpleton wouldn't appreciate what he's done for this town and this team. I welcome the move. I think anyone who thinks it's a cover for something else is just being duped....Cal and I are great friends, and he'll be a tremendous asset to the Orioles; he's not some chump like a lot of these ex-ballplayers….To keep my job, I know that I just have to win. I'm not a dope....Guys, I'm telling you right now, I take it real personal. I don't like losing…I live and die with this team. And you dimwits are trolling for some story that isn't there. It's not there. But you'll write it into your moronic columns anyway. Right now it's the first day of April and we're opening against James Shields and the Tampa Bay Rays in six days. It would be foolish for me to get distracted by this kind of speculation."