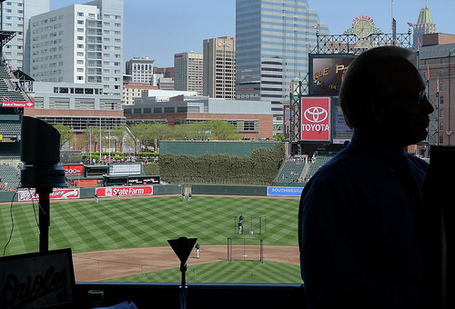 Sunday afternoon, the Orioles hosted their 2nd annual blogger’s day at the Yard, and as Stacey mentioned yesterday, we were amongst the blogs invited. Though the game left plenty to be desired, it was a great experience for all the bloggers involved and the entire day served as a reminder of some of the small things The Warehouse is doing differently, and doing right these days.

Writers from sites across the O’s blogosphere were escorted up to MASN’s suite, where we’d be watching the game. If, like me, you’ve never been in a suite before, let me tell you – it’s as swanky up there as you think it is. From the suite, we took a trip to the MASN broadcast booth to see where the TV magic happens.

With Jim Palmer on the broadcast DL with a case of busted pipes and it being a Sunday, we figured we’d be meeting Jim Hunter and Mike Flanagan in the booth. Well, we got the Flanagan part right but on the elevator ride down, we were informed that our man Gary had flown in direct that morning after calling the college hockey Frozen Four tournament in Michigan.  Needless to say, we were thrilled - especially considering Stacey had worn the "Please drink…responsibly" tribute t-shirt for the occasion. When I say we were "thrilled", I mean Stacey and I squealed like 12 year olds at a Jonas Brothers concert. Duck was more subdued in his reaction, but only slightly.

After both Gary and Flanny patiently answered questions from the group (the booth btw, is very cool), Stacey spoke up about her shirt.  I’m not sure any of us were confident that Gary would get the joke, but he immediately let out one of his professional broadcaster stentorian belly laughs. All this time, he wasn’t sure if people noticed his little inside joke "You’ll notice that pause between ‘drink’ and ‘responsibly’ gets longer as the season goes on", he said. "By September, I might wait a whole inning!"

It was a great moment, and Mr. Thorne is sure to look quite dashing in the t-shirt we’re sending him.

The other big f-ing deal of the day came when, to our great surprise, Andy McPhail came to chat with the group.  He was pretty much just how I would have expected him to be. Smart, articulate, calm and respectful.

Watching the game from the suite, we were joined by Rick Dempsey. Now, the MASN suite is where he usually does his work during the game. He sets himself up with his scorecard and game notes and preps for his post-game show.  Upon finding a dozen or so bloggers in his work space, he seemed...surprised.  He was happy to hear that he has a gaggle of nieces and nephews on the interwebs, though. I too, was wearing the appropriate CC tribute t-shirt.  The Demper was courteous, if a little confused by the whole thing.  Honestly, he was much nicer than I would have been if a bunch of weird bloggers randomly showed up in my office.

Later in the game, Roch, and Jim Hunter spent some time with us, and pre-game Steve Melewski hung out for quite a while. I know Roch gets some crap from some of us at times but honestly, after this weekend, I’d have a beer with him any time and I’d recommend you do the same.

The game was a let down, and the first week of the season is deeply concerning. But our day with the MASN and Warehouse teams did provide a bright spot - and not just because it was fun to meet them all and sit in the suite and get behind the scenes (but yes, it was really fun).  We’ve had over a decade of losing, that’s obvious. But even before the losing began, there were problems in how the team’s management related to fans. Some of it was real, and some of it was perception -  but a relationship that was once cool had become icy.

It’s a small thing to open your doors to blogs, but an impactful one. Blogs are where some of a team’s most passionate fans go to analyze, vent, discuss, and bond over a shared dedication. The bloggers themselves are some of the most sincerely devoted fans any team has – blogging is a lot of work, and it doesn’t pay.  Of course, giving bloggers access for a day isn’t just "fan appreciation". New media is becoming a more broadly accepted medium, and the staff made an effort to treat us like members of the media, not just some bunch of pantsless freaks escaped from our mothers’ basements.

All in all, it was a nice thing for the Orioles to do for some of their most dedicated fans, it was a smart PR move and it showed they are savvy enough to understand the evolving media landscape.  After decades of failure on every possible front, our players in uniform may not have turned the corner yet, but the Warehouse is starting to.

For more pics, Stacey has some up on the Camden Chat facebook page, and here is my flickr set.