Ok, so this is the first time I've ever attempted to talk about this kind of stuff, so forgive me if I stumble a bit. My new friend over at DRaysBay provided me with the data and some basic info, and this is a learn as I go process.

I think we're all happy to know that Brian Matusz is pitching tonight. Matusz owns the only Orioles win on the season, a five inning effort (four of which were impressive). Even the 3rd inning, in which Matusz started by walking the bases loaded, resulted in only two runs as he recovered relatively well. All told Matusz walked 5 and struck out 7, and I feel comfortable saying that I don't believe he'll walk that many again.

Below the jump you'll find the breakdown of Matusz's pitches from his first start against the Rays. It'll be interesting to compare to his results tonight against the same team. 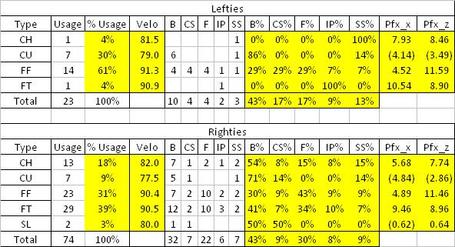 Matusz relied mostly on his fastball, throwing either the two-seam or four-seam 67 times out of 97 pitches. Given the vertical movement of his FB it makes sense. His average velocity is in line with what we saw from him last year, and given the high swinging strike % of his changeup and curveball he was able to use them effectively against the fastball (except of course when he couldn't get them over the plate).

Throwing 43% of his pitches for balls obviously isn't good and certainly isn't what we expect from Matusz. I'd expect to see that percentage drop tonight. To contrast the disappointing amount of balls is the fact that the Rays put only 8 balls in play against Matusz in the game (2 singles, 4 flyballs, 1 pop up, and 1 line out). With numbers like that, if Matusz had been able to control the walks he could have been dominant. 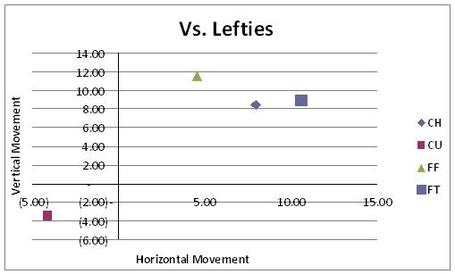 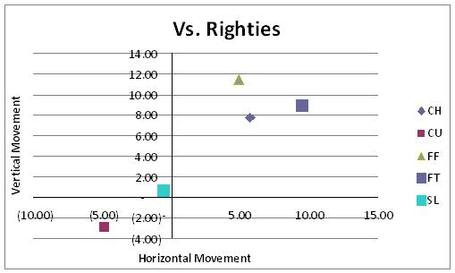 First of all, I'm not sure what that slider is. Does Matusz throw a slider? Given the lack of movement on the two this data says he threw, I'm guessing they were actually curveballs gone wrong. Matusz threw both his two and four seam fastballs with better than average movement but had trouble with the curve (11 of 14 were balls). His changeup, which he also had some trouble throwing for a strike, was just about average. (For more information on pitch movement, see this article at The Hardball Times) 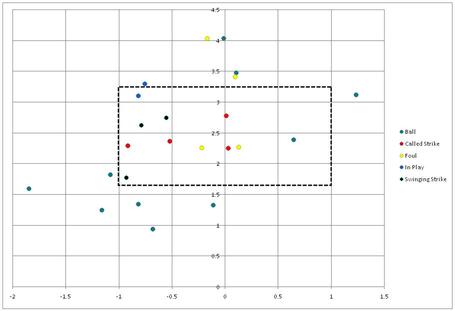 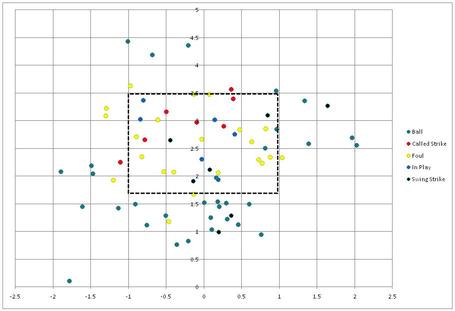 The thing that jumps out the most (again) is the high amount of pitches that were balls. For the most part he missed in the same location all night. Down and away to lefties, down and in to righties. The Rays also fouled off a bunch of pitches in the strike zone, it'd be nice if he could drop that relatively high number down and increase his swinging strike %. A few more instances of solid contact on those foul balls and this could have been a different ball game.