Inside Information: Q&A with Bluebird Banter

Share All sharing options for: Inside Information: Q&A with Bluebird Banter 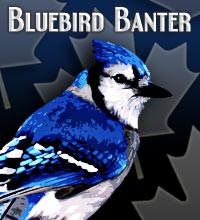 Tom Dakers at Bluebird Banter took the time to answer a few questions prior to the first meeting of the Orioles and Blue Jays this season. Thanks, Tom! I'm a little sad that I forgot to ask him who would win in a fight, the Camden Chat Oriole or the Bluebird Banter Blue Jay. They both look pretty mean.
1. Most people are predicting the Blue Jays to have a poor 2010 as they rebuild for the future. What will need to happen for you to consider 2010 a success for the Jays?

It will be a success to me if some of our prospects and young players progress. Young players like Brett Wallace, catcher J.P. Arencibia and newly signed Cuban Adeiny Hechevarria have to force their way into the lineup for 2011. Top pitching prospects Kyle Drabek, Zach Stewart and Brett Cecil have to work their way towards the majors.

2. With A.J. Burnett departing prior to 2009 and Roy Halladay being traded this off-season, the Blue Jays starting rotation has become something of a mystery. Tell us about the rotation and what opponents can expect from them.

To start the season it looks like the rotation will be Shawn Marcum, Ricky Romero, Brandon Morrow, Marc Rzepczynski and Brian Tallet.

Marcum is returning from missing the 2009 season after Tommy John surgery. In 2008, at the time of the injury, he was 9-7 with a 3.39 ERA in 25 starts with a 1.16 WHIP. He was a very good pitcher before the surgery and most pitchers to come back from Tommy John throwing pretty well. Shawn's looked good this spring (for whatever that's worth) and will be our opening day pitcher.

Ricky Romero, a lefty, was the favorite to be AL Rookie of the Year at the All-Star break last year, but his second half wasn't as good. He still finished 13-9 with a 4.30 ERA. If he has another year like last year, we'd be happy but if he's a little stronger and finishes well, we'll have a good pitcher. Again he's looked good in camp, his last start he had 10 ground outs and no fly outs, with 5 strikeouts. If he can keep the ball on the ground like that, things will be good.

We picked up Brandon Morrow from the Mariners for Brandon League. Morrow's a former first round pick and throws hard. He was mostly used as a reliever for the M's but we are going to have him as a starter. He gets a lot of strikeouts but gives up a lot of walks, which might not play so well in the AL East. On the other hand he is just 25 and definitely has the stuff to be good.

Marc Rzepczynski, who we call Scrabble, because his name is worth 40 points in the game and, well, I can spell Scrabble. Last year Scrabble started the season in Double-A and ended up with 11 starts in the majors. In 61.1 innings he struck out 60 batters and had a 3.67 ERA. He is another lefty ground ball pitcher and a personal favorite, I love watching him.

Brian Tallet is likely going to start the season as our 5th starter, for reasons that escape me. He's been a good lefty middle reliever for the last few years. Manager Cito Gaston feels a loyalty to the guy, since he filled in in the rotation last year, when we have roughly 35 injured starting pitchers. He did pretty well but tired as the season went on and ended with a 5.32 ERA. Most of us are hoping he only holds the job for a month or so and then Dustin McGowan, who is trying to return from missing 2009 with shoulder surgery, or Brett Cecil, who cut his thumb at the start of spring, putting him too far behind to be ready for the start of the season, take the job.

3. Just how good is Travis Snider going to be? What kind of player does he draw comparisons to? Do you think 2010 is the year he breaks out?

I think Travis Snider will be an excellent player. He is just 22 this year, so this might not be his 'breakout' season but I hope he establishes himself as a major leaguer this year. Our biggest worry right now is that Travis isn't manager Cito Gaston's favorite. Cito has a history of not exactly making it easy for great young hitters get into the lineup. Carlos Delgado and Shawn Green are just 2 that didn't strike the manager's fancy.

I guess the one I'd compare Travis to is Prince Fielder. He's not quite as large, though he is solid, but he has the power stroke. Travis can hit the ball a long way, that's why we call him Moonraker.

4. Is Vernon Wells a lost cause? If he has another season in 2010 like he did in 2009, how should the Blue Jays proceed given his contract?

Oh Vernon, I'm very much hoping he has a better year this year. 2008 he did pretty well, hitting .300 with 20 homers in just 2/3 of a season, missing a third with injuries. This off-season he had wrist surgery. The sore wrist may have had some to do with his crappy season, a sore wrist does make hitting a ball far less fun.

He's never going to hit well enough to be worth what we are paying him. But then the contract isn't his fault and we are going to be paying him until 2014. It would be nice if he had a few decent seasons by then.

What can we do if he is lousy again? Not much. He's getting $23 million a year so we can't exactly release him now and he is untradeable.  So for better or worse he'll be on the team until at least 2013.  So, for my sake, cause I'm tired of talking about it, hope that he has a good year, will you?

5. What is your prediction for the 2010 AL East standings?

New York, Boston, Tampa Bay. Then your Orioles and my Jays battling it out for last.