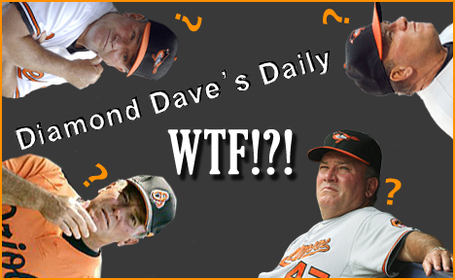 There were many nominees last night which might have won the inaugural DDDWTF award.

Certainly Trembey's pulling of Koji, who pitched effectively in the 8th inning and had only thrown 16 pitches, in favor of Alfredo Simon, who has been damned lucky as a closer (given his WHIP of 1.5), was questionable.

There was also much outcry in the gamethread when DD inexplicably subbed Lugo in for Wiggy in the eighth inning, and sent Wiggy to the showers. While making a defensive change is understandable, Wiggy is the Orioles' hottest hitter (5 for his last 8), and had hit two homers in the game. He could have easily slid over to first and replaced Garret Atkins, who's batting .253.

But really, the most egregious Trembley blunder last night came in the fifth inning. In a tight, 2-0 game, with Izturis on first and Atkins third, and only one out, Corey Patterson (who was hitting .400 at the time) was up to bat. Inexplicably, Trembley sent Izturis (who has stolen two bases all year) against Lou Marson (who is second in the league in throwing out base stealers). The predictable results were enough to make any Orioles fan scream, WTF!?!

(Edit: If in fact, as has been mentioned below, Izturis went on his own, then DD's subbing of Lugo for Wiggy shall be sufficient to win the prize).