Share All sharing options for: Nationals 4. Orioles 3: Just another day in Natstown

The Orioles and Nationals played ten innings today, managing to cram about fifteen minutes of excitement into a game that lasted three hours. Those minutes took place in the first inning, the top of the ninth, and the bottom of the tenth. Otherwise, the Orioles managed just one single and four walks. The Nationals had a little more going on with seven singles, one walk, and one hit by pitch, but they couldn't make anything happen either.

Corey Patterson and Nick Markakis starting things off with back-to-back singles in the first, putting runners on first and third with none out. Miguel Tejada ruined it, though, grounding into a double play. Patterson scored on the play, but that'd be it for the O's.

In the bottom of the inning the Nationals scored three runs with a little help from the umpire and Adam Jones. They started in similar fashion as the the O's, with Nyjer Morgan and Cristian Guzman singling (Morgan only made it to second base, which can only lead me to conclude that Corey Patterson > Nyjer Morgan). Ryan Zimmerman then hit a ground ball that looked to everyone like a double play, but the first base umpire indicated that Zimmerman beat the throw. Since I was at the game I didn't see a replay, but consensus by those who did was that Zimmerman was out and that it wasn't particularly close. So instead of two outs and a runner at third, the Nats had one out and runners on the corners.

Adam Dunn followed the non-GIDP with a pop out, but Millwood couldn't end it. He hit Josh Willingham to load the bases, then Roger Bernadina hit a ball deep into center field. Adam Jones raced back and, just in front of the wall, leapt into the air with his back to the infield. The ball hit his glove and for a half -second we all thought he'd made a fantastic catch, but he lost it and the bases cleared. The only good thing about that play was the fact that Jones picked up the ball and threw it in instead of having a temper tantrum.

That would be it until the top of the 9th inning. During the downtime, though, we saw some pretty great scenes at Nationals Park. Check out the pictures below the jump. 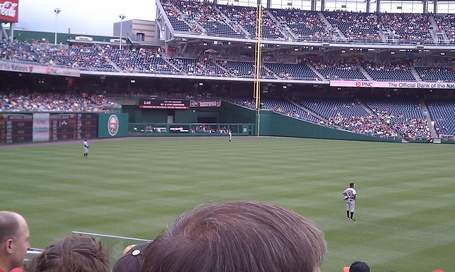 All three outfielders wore high socks. We determined that they did it on purpose as a symbol of solidarity, and that it was definitely Corey Patterson's idea. 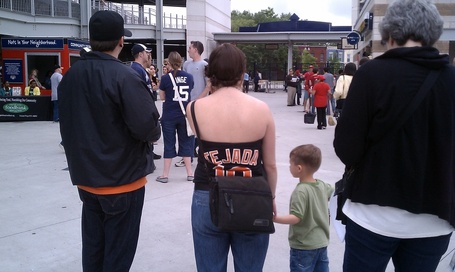 This woman turned a Miguel Tejada jersey tee into this fashionable tube top. The perfect attire for a day at the ball park with your small child. Also, someone likes Brandon Inge enough to wear his tee to an O's-Nats game. 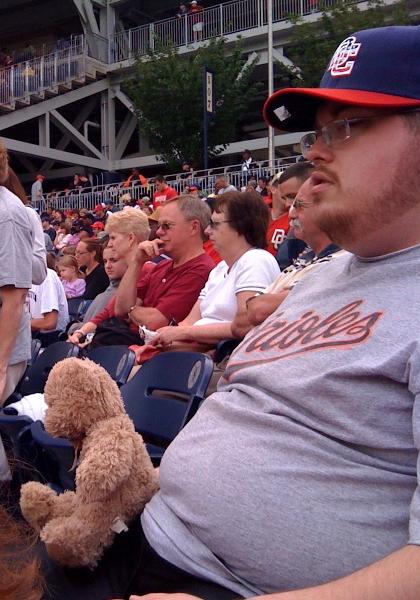 This dude, who appeared to be alone, is not only wearing an Orioles t-shirt and a Nats hat, but he is acting as though it's perfectly normal to have a teddy bear sitting on his lap. 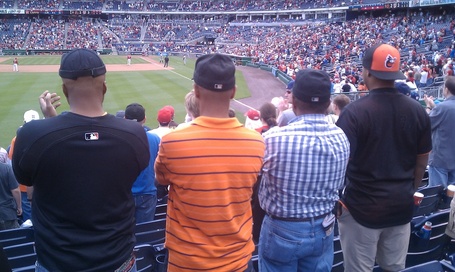 These four guys were drinking frozen margaritas in giant, skinny pink plastic cups all day and were a hoot. I sort of wanted to be friends with them. The one on the far left started a rally cap trend in our section and then took credit for the O's short lived comeback, which brings us back to the actual events of the game.

With the Nationals up 3-1 going into the 9th inning, they brought in their closer. If you don't already know this, Matt Capps comes into the game to The Final Countdown. That's awesome. But really the entire Nats bullpen is hysterical when it comes to music. Drew Storen was brought into the game with a twangy country song that begins with the singer asking the object of affection if she comes to the bar often. Sean Burnett comes in to Here I Go Again by Whitesnake. Tyler Clippard's theme song is Peaches by the Presidents of the United States of America, and is accompanied by dancing peaches on the scoreboard.

Anyway, the 9th inning. After Ty Wigginton struck out to lead things off, Luke Scott singled. Adam Jones came to the plate and lined an opposite field double. It was his only hit of the day, but am I crazy if I say he's looking better at the plate lately? That put runners on 2nd and 3rd with one out and Matt Wieters at the plate. I really needed Wieters to knock both runs in because I wasn't prepared to root for the next batter, you know who. Unfortunately, he didn't do needed, instead grounding out to second base. It did score a run and move Scott to third, but there were now two outs and a batter at the plate who came into the game hitting .211/.250/.211. Torn between wanting the Orioles to tie  the game and my hatred for the batter, I gave in the rooted for the laundry. Andrew @ TLC hoped for a balk to score the run and I agreed that would be ideal. Instead, though, the batter lined a single into center tying the game.

Because the Orioles were playing in the National League this weekend, the next spot in the lineup belonged to the pitcher. Poor Dave Trembley looked at his bench and had to choose between Garrett Atkins and Craig Tatum to bat for Matt Albers (Scott Moore had pinch hit earlier for Kevin Millwood; Lou Montanez for Will Ohman). Reluctantly I'm sure, Trembley sent my second least favorite Oriole up to hit. My first favorite Oriole, who was standing on first base, decided to make something happen and took off for second. I don't know if Trembley called for the steal or if the runner decided on his own, but either way it was a good risk to take given the likelihood that Garrett Atkins would actually get a hit. Nats' catcher Wil Nieves did the Orioles a favor by throwing the ball into center field and allowing the runner to move to third. Atkins actually gave the ball a ride then, but it hung up and was caught well short of the warning track.

Alfredo Simon came on to pitch the bottom of the 9th inning and though I'm always worried about his walks. He didn't have such an issue today, though. He retired the Nationals 1-2-3 (with some help from Luke Scott who made two quite good plays at first base). The Orioles went quietly in the top of the 10th inning and Simon came back out to pitch. The first hitter, Willie Harris, hit a sharp ground ball between well inside first base and Luke made another very good play, diving to his right and gloving the ball. He tossed to Simon covering for the out, but on the play Simon injured his hamstring and had to come out of the game. Just what the Orioles needed, both then and in the days to come.

With Simon out of the game, Cla Meredith came in to face Josh Willingham. After running the count to 2-1, The Claw put a fastball right down broadway and Willingham hammered it (that's his nickname, you know. Ask Rob Dibble) to the center field bleachers, giving the Nationals the win.

Crappy loss but at least they gave me a few moments of excitement unlike at the other games I've been to this season. Off day tomorrow, then the A's come to town for three. Wednesday is Nolan Reimold bobblehead day. Oops!