Share All sharing options for: DDDWTF for 5/25: Using Will Ohman in the 9th with a 4 run lead 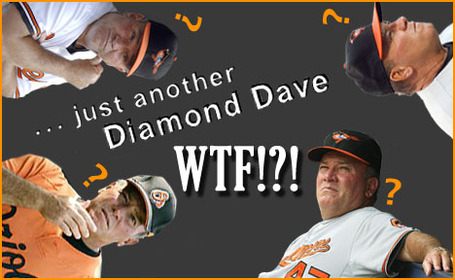 It's been awhile since our last WTF update, but despite the Orioles win last night, I just can't get past Dave Trembley's decision to use Will Ohman in the 9th inning of the game with the Orioles winning 5-1. The Orioles bullpen has been in shambles and after an embarrassing series loss in Washington, I'd imagine Trembley was desperate for the win. But turning to Ohman in the 9th is the kind of move that will only hurt the Orioles in the long run.

The O Man has been a great pickup for the Orioles. He signed a minor league deal, earned a place on the team in spring training, and after a brief period early in the season of allowing inherited runners to score, has been quite good. The obvious problem with being an effective reliever in an ineffective bullpen is the potential for overuse. Will Ohman currently leads the American League in appearances by a reliever, with 25 in the O's 46 games. That's on pace for 88 games this year, which is ridiculous.

Ohman, in case you're not aware, pitched 83 games for the Braves in 2008. He then spent most of the 2009 season on the disabled list with a shoulder injury. It's not smart to use any reliever as often as Ohman is being used this year, but one with his recent injury history especially. In a game where the Orioles needed to get only three outs before allowing four runs, it was the perfect chance to give Ohman a rest and let another reliever take over. Trembley even could have left Mark Hendrickson in for another inning. He's a long reliever (he even made a start this year) and he had just thrown 21 pitches in two very effective innings.

In the post game press conference, someone asked Trembley if he thought about changing his bullpen plan when the Orioles scored two extra runs in the 8th inning. Trembley did not, he wanted to bring in Ohman to close things out even with the four run lead because he's the best pitcher out there. I was dying for someone, anyone, to follow up with, "Doesn't it concern you using Ohman so much this year? He has a history of injury and leads the AL in appearances." We can all predict how Trembley would have answered, but I still wanted to hear the question asked.

It was was a good win for the Orioles, but I don't look forward to August when Will Ohman has a dead arm, or worse, another shoulder injury.