Inside Information: Q&A with Twinkie Town

Share All sharing options for: Inside Information: Q&A with Twinkie Town 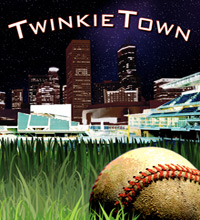 The Orioles play their first series against the AL Central beginning tonight at the new home of the Minnesota Twins, Target Field. The Twins are off to a great start at 19-9 and they're coming into the series on a four game win streak.

1. What are your first impressions of Target Field? How has it changed play for the Twins?

There's a lot that I like about Target Field.  First it's, um, outside.  Real grass and real air = good things.  But if we're comparing Target Field to the Dome, we could be here all days.  Specifically, the approach to the stadium is great, there's a lot to see on the exterior.  I dig the limestone tower in the left field corner, the wide concourses, the boomerang behind home plate is gorgeous when it's lit up, and you get a great view of the Minneapolis skyline over the open concourse in right field.

As far as how it's changed play, there are a few things.  First, real grass in the infield plays differently, which affects the bunting part of the game...which Gardy likes.  I'm not sure if it means these guys need to be better bunters or not, but it's changed how the ball reacts on the surface.  In the outfield, apart from wind affecting trajectory and routes, there's that odd overhang in right field.  I'm sure Markakis will check it out, because he'll need to be aware of where some of those deeper balls will come down.  Balls that might normally carry to the warning track could bounce off the face of the overhang and roll back toward the infield, so it needs to be played with some care.

2. Francisco Liriano has had amazing success so far this year. I don't see him often, of course, but I'd sort of written him off after the past two years. What changes has he made to come back so good this year?

In quantifiable terms, Liriano's fastball and slider have come back to life.  Without resorting to the mechanics that led to the inevitable injury last in 2006, he's adjusted to the point where they've both become plus pitches consistently.  The fastball is back up around 94 and can be located for strikes, and the slider is even better because of it.  As a result he's getting a lot of ground balls again, as hitters struggle to make solid contact.

The higher groundball rates have helped keep him out of big innings, where over the last couple of years a lack of consistency and sporatic breakdowns in control meant he was susceptible to running up pitch counts, as well as opponent runs and batting average.  It was like watching a guy change from one inning to the next. He also seems stronger mentally this year.  Effective pitches, groundballs, no home runs...these things help, but this year when he's gotten into trouble he's been able to work himself out of it.  Of course, success breeds confidence as well.  So it's hard to say what's real, what's interpretation and what's small sample size, but this much is certain:  he's been a lot of fun to watch over his first five starts.

3. JJ Hardy is someone that I wanted the Orioles to go after as solution at SS. Did you like the trade at the time? Do you feel the same way now? How has he been playing this year?

I did like the trade.  There were a lot of Carlos Gomez fans who were disappointed, and I was sad to see him go, but it was a good move by Bill Smith and the front office.  They moved quickly.  It was a situation where the Twins had a lot of talented outfielders, and a few in the system, while not having stability (or talent) in the middle infield.  Even now I still like the trade.  All things considered, Hardy was the best option out there and I'd rather have Denard Span than Gomez.  It worked for both sides, I think.

He's been playing alright, and has come up with a few big hits.  But for me, the offense is all gravy.  We've got enough offense.  As far as I'm concerned, if he's healthy and continues to play good defense (14.2 UZR/150 currently) then I'm perfectly happy.

I think it signifies a one-time change for the Twins, at least until they figure out exactly how much revenue they can expect (and where they can expect it from) through Target Field.  For the next few seasons, payroll growth will be slow but steady--we won't see another $30 million jump for next season.

One of the issues with the Dome was that it was, essentially, a football stadium.  The Vikings dominated revenues from parking, concenssions, all that good stuff.  With Target Field, all revenue goes directly back into the organization.

The great thing about the Twins is knowing that additional payroll doesn't mean they'll change how they do business.  They're not going to start being major players in the free agent market, or making trades where they pick up large salaries.  In general, Twins fans are pretty happy with how successful the club has been in spite of certain disadvantages in the past.  What additional payroll does mean is that they'll be able to hang onto certain core players.  Like Joe Mauer, for instance.

5. I know it's early, but do you think it'll just be a two team race in the AL Central? Do the White Sox have a shot? They don't look very good so far.

Yeah, it's early, and I don't want to dump on any team.  Even one I'm not a big fan of. <---Minnesota Nice.  It's early enough for the White Sox to turn things around, but they need more contributions from more of their questionable off-season acquisitions.  So sure, right now it does look like it will be a two-team race, between the Tigers and the Twins.  Detroit has a good offense, and they have the pitching to get the job done if a few guys step up and play like they're capable of playing.  I still think the Twins will take the division, but we need a lot of things to still go right in our own right.  To be continued.

6. Finally, can you tell us what it's like to be a fan of a good baseball team? One that isn't wholly incompetent and generally in shambles? We're really curious.

I'd just like to point out how terrible the Twins were from 1993 - 2000, so I can sympathize somewhat.  A combination of poor drafting and a philosophy that didn't work can do that to a team with limited resources.  I'm not exactly sure what's kept Baltimore in a funk, apart from being drowned out by the game's two biggest resource-hoarders in the BoSox and Yanks, but I think that's one of the great things about being a true fan of your team:  you just hang in there, and you grasp blindly to the belief that YES, DAMMIT, SOMEDAY THINGS WILL GET BETTER.

After the Twins game today I actually flipped it to the Baltimore/New York tilt, in time to watch Matt Wieters and Nolan Reimold go back-to-back.  I thought the Orioles might pull out a big comeback there for a minute.  Wieters absolutely murdered that ball, it'll be fun to watch him the next few days.

As for being a fan of a good baseball team...more than anthing I'm just proud.  The Twins are a good team to cheer for, because there's definitely a satisfaction you get when your team can be consistently competetive for a decade without resorting to big money tactics.  Plus, the club generally fields pretty good guys.  I like cheering for guys that aren't full of themselves or total ass clowns. /LoveFest.