Padres 3, Orioles 2: I hate them more today than yesterday

Share All sharing options for: Padres 3, Orioles 2: I hate them more today than yesterday

This game can pretty much be summed up with two pictures. Do you agree? 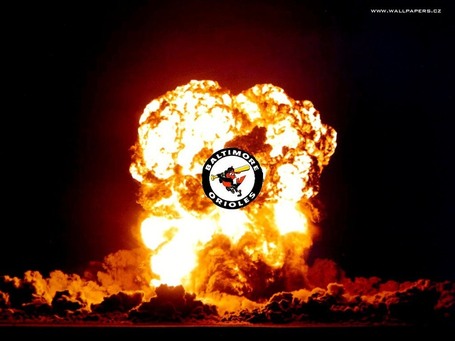 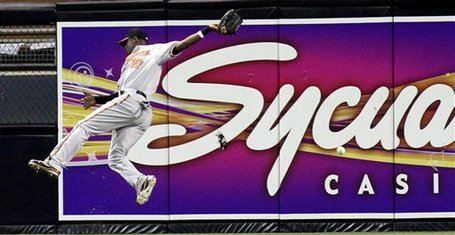 The end results don't really show it, but Brian Matusz had some troubles tonight. For some reason he pitched tentatively to start the game and threw way too many pitches. But he was effective, giving up just one walk and four hits through the first five innings. In the sixth, Chris Denorfia led off with a single through the hole on the right side and stole second. Adrian Gonzalez then hit a ball to deep center field. Adam Jones appeared to get there in plenty of time but...well I don't know what happened. He overran it and twisted around and completely botched the play (see the picture above). Gonzalez ended up on second with a double and Denorfia scored the only run Matusz would allow on the night. Matusz retired the next three hitters, and at 114 pitches, he was finished after six innings. His final line: 6.0 IP, 6 H, 1 ER, 1 BB, 4 K.

The O's offense scratched out 2 runs on 8 singles and David Hernandez came in to close it out in the 9th. Obviously that didn't happen. He walked the lead off hitter, then Jerry Hairston singled, then he misplayed a bunt to load the bases with none out. Well done, David. he struck out pinch hitter Nick Hundley for the first out, then David Eckstein stepped to the plate and, using his grittiness and nothing else, singled in the tying run. With that single the Orioles blew their 12th save on the year, which as you can imagine leads the major leagues. With one out and the bases still loaded Ty Wigginton made a really fantastic stop at first and threw home for the second out, but it didn't matter because Adrian Gonzalez was the next batter and he immediately singled to right to win the game for the Padres.

Tell me you expected something different.