Last Wednesday I posted a story asking how much you hate other teams. As probably could have been predicted, there are really only two teams that are almost universally hated by O's fans and a third that we view with some contempt. For the most part we don't care about most teams, as a fanbase we don't really LIKE any other teams (besides the Twins, because who doesn't like them), but we are divided on a few.

It surprised me that so many people gave out multiple ones. There were sixteen number ones doled out to teams not named the Orioles. I can understand having two teams, but I can't understand them being totally equal. I mean, you have to have a #1 team, don't you? To the person who gave a one to both the Orioles and Yankees, who do you root for when they play each other? And furthermore, how do you live with yourself? Even I, who have admitted to having a shameful affair with the Rays, wouldn't dare rate them a one.

United in Hate
It's no surprise that the Yankees, Red Sox, and Blue Jays were the main recipients of ire in this exercise. A bit further down the line you can toss in the Mets and the Angels, but the Mets actually have a few supporters. I don't really get why people hate the Mets, other than the fact that their fans (at least the ones I've met) might be the biggest sad sacks I've ever known. They seem kind of harmless otherwise.

Easy to Like
Only two teams received nearly universal high marks other than the Orioles. The first, the Minnesota Twins, is no surprise. The Twins seem to be a team that most people, not just Orioles fans, can get on board with. I've always admired their competent front office, that's for sure, but lately they have started getting on my nerves the way they build a team that's just good enough to win the A.L. Central. I know the playoffs are a crap shoot for the most part, but you can't just put the Twins up against a team like the Yankees and expect anything from them.

The second team to get votes mostly on the "like" side of the spectrum is the Atlanta Braves. That surprised me at first, but I'm going to go ahead and chalk this up to two things. The first is the TBS effect. I don't even know how many Braves games I watched growing up simply because they were on, and I know a lot of you did the same. The second reason for the high marks I assume has to be how good this team was in the 1990s when so many of us were in our formative years. They always seemed like the nice version of the Yankees to me when I was a kid.

Underdog Syndrome
Three teams got relatively high marks thanks to their status as underdogs. None are loved by the O's fan base, but all get scored on the friendly side of neutral.

The Rockies won many fans over with their miracle run to the World Series in 2007 and the residual good feelings make them likeable to many. They have of course been in the race every year since then so they aren't exactly underdogs, but it's hard to turn on the team that many hoped would take down the Red Sox.

The Brewers are another team that people like to root for although their magical postseason appearance was actually kind of pathetic. They're kind of the anti-Cubs, really, which automatically endears them to a number of people. It's worth noting they only got one 9 vote, the least of any team besides the Orioles.

Newcomers to the underdog position, the Reds might only have gotten more positive votes because of their position this season, currently one game up on the Cardinals in the NL Central.

A Birdland Divided
If you just looked at their average scores you might not realize these teams are actually drastically split among Birdland voters. The Nationals, Pirates, Phillies, and Rays are all, for fairly obvious reasons, looked upon very differently by our fanbase.

The Pittsburgh Pirates are paying for their past sins. Nobody really loves the Pirates, they got a number of 3s and 4s probably due to their current loser status, points for being the underdog as well as points for our fanbases being kindred spirits. Those things are important to me; I gave them a three. Other fans still hold a grudge as the Pirates are responsible for two of the Orioles World Series losses in the seventies. Plus, given the rivalry between two other teams from our respective cities, some people just hate Pittsburgh.

The Tampa Bay Rays were the only team to average an even 5.0 by voters, but the results were far from neutral. I think it's safe to say that if the Rays were in any other division their score would have been quite a bit higher and they could have fit easily into the underdog category, but being a very good team in the AL East is enough for some people to give them a less than friendly score. There are others of us who are still happy to see another team doing damage in the AL East and who enjoy the young talent on the team. Give the Rays a few more years doing what they're doing and the Birdland supporters will fall away.

The Nationals and Phillies both fall under the umbrella of geography. Both teams are relatively close to Baltimore, both play in the National league, both have divisive fan bases (Philly fans are jerks! Nats fans used to be O's fans!), and depending upon where we live, they might all be on our televisions every night. Any and all of those reasons serve to both draw and repel fans. Only the Red Sox and Yankees drew more 9 votes than the Phillies and Nationals, but they were also the only teams other than the Red Sox and Cubs to get more than one 1 vote, and join just the Braves, Nats, Twins, and O's for having more than 10 votes of 1 or 2.

East Coast Bias
The remaining fifteen teams didn't garner much attention either positive or negative, and all except the Marlins have one thing in common: they're not from the east coast. And can we really count the Marlins as an east coast baseball team? I don't think that we can. There were a handful of very high or very low marks for these teams, but for the most part they didn't garner much interest at all. The most neutral of all teams, the Arizona Diamondbacks, got a whopping seventy-seven 5 votes. Attention to all of you mid-west and west coast teams: if you want us to pay attention to you, maybe you should have an amazing end of season run to get to the playoffs or be bad forever and then get good, or maybe beat the Orioles in a world series or two thirty years ago.

Below are the detailed scores for each team:

Charts! Because why not? They're pretty. Other than the Yankees, Rays, Red Sox, Blue Jays, Orioles, Twins, Angels, Nationals, Phillies, and Pirates, all of the teams had a pretty normal distribution with the least amount of votes at the extremes and the most at 5 (neutral). Of those twenty teams, 12 got more votes on the positive, 8 more votes on the negative. 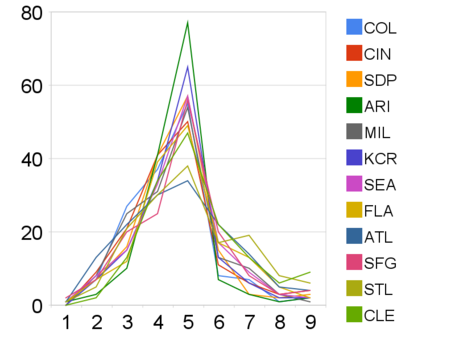 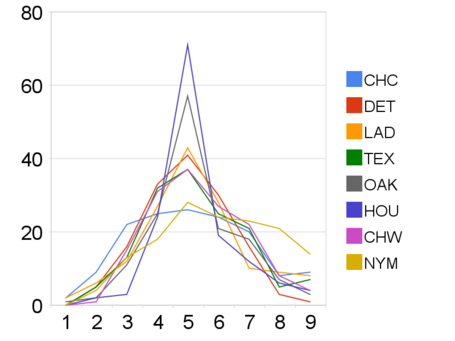 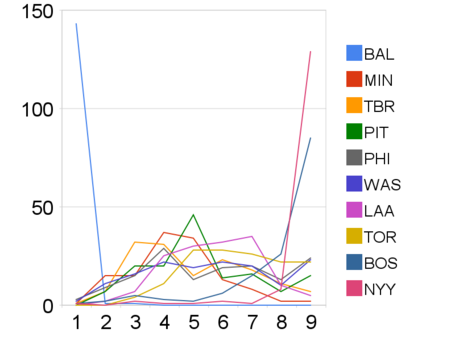 Well, that was fun. And kinda pointless.