Deep Pockets Required for Success in MLB: A Decade of Data

Share All sharing options for: Deep Pockets Required for Success in MLB: A Decade of Data

Major League Baseball faces a stark economic conundrum: each year the disparities between the haves in the large markets and the have-nots in the smaller ones become more apparent. The players strenuously oppose a salary cap, and the owners have a wide and incompatible range of views on how to keep the game healthy.

The attempted fix of these issues, a payroll tax with "Revenue Sharing", was introduced in the late 90s. Supporters state that it has cured the game's ills. But MLB's data on year-end payrolls, stretching back to 1999, suggests otherwise.

Some background: A few weeks ago, I stumbled across an interesting year-end series being published by Maury Brown over at The Biz of Baseball. MLB had recently released 2010 year-end player payrolls for all 30 MLB clubs, and Brown was looking at the trends within each division over the past 12 years, starting with the AL East (he went on to analyze the AL West and NL Central; I haven't seen word on if/when he will finish the series). 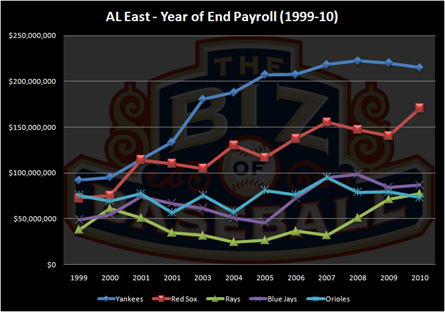 ...but it's worthwhile to look at the trends and ask what it means for the future health of the sport. For example, Brown mentions that

If baseball's economics don't change, it's easy to imagine that $141M gap widening over the next decade, perhaps to the point where a quarter of a billion dollars will separate the fat cats at the top from the hapless stepchildren at the bottom.

I hunted around the Biz's site a bit, and eventually found EOY player payroll figures for all 30 baseball clubs since 1999.

Wow. 12 years of data? That's a HUGE sample size, more figures than I'd ever seen collected in one place, and an excellent way to analyze where baseball is headed, particularly since it includes nearly all the years of revenue-sharing, which began in 1998.

I wanted to wade through that data and see where it led. As someone who (admittedly) has long been convinced that a salary cap is needed to level the playing field in baseball, I thought it would be interesting to see what correlation (if any) there was between spending money off the field and success on it.

Follow me after the jump to see what I found....

(Note: with all images below, you can click the graph to enlarge.)

The first question for me was obvious: What's it look like if we chart a team's won-loss record against its payroll? Whenever I get into a discussion about how high-payroll teams are successfully buying pennants, there's always someone who says, "Look at the Twins! Look at the A's! They prove you can do it with less payroll!"

What they actually prove is that every rule has its exception. 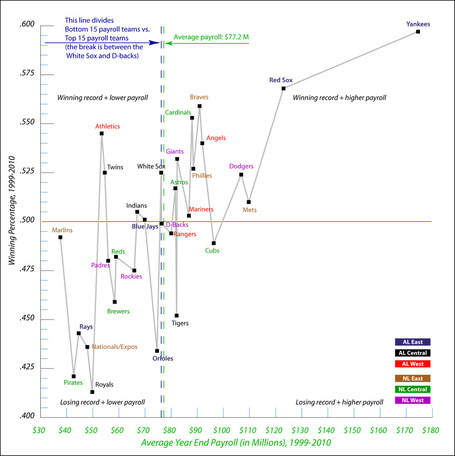 If you're a GM, you'd most want to be in the upper-left quadrant: winning at bargain prices. Alas, the only two teams solidly in that quadrant are the A's and Twins (the Indians and Jays creep over the line near the center of the graph). The worst place to be is in the lower-right  quadrant: losing while spending a lot. Again, only a couple of teams show such blatant mismanagement: the Cubs and the Tigers.

For the most part, however, the majority of MLB teams follow a general trend: more money equals more success.

Just to highlight the notion that more money virtually guarantees more success, look at the shape of the scatter graph with no labels or axes: 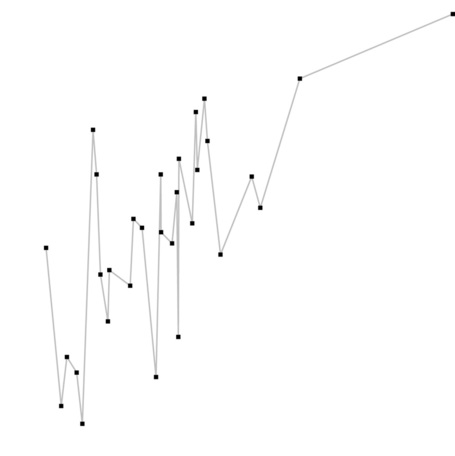 It can't be disputed that there is a pattern, and the pattern points to a direct correlation between higher spending and wins. Sure, there are a few outliers, but 24 of 30 teams (80% of them) fall right into the shape.

"Well," say the proponents of keeping things the way they are, "nearly every team has been to the playoffs in recent memory." And they're right....to a point. But is that how we want to measure success? By going to the playoffs, say, once every twelve years?

This graph represents the number of years, out of the past 12, that a team has appeared in the postseason: 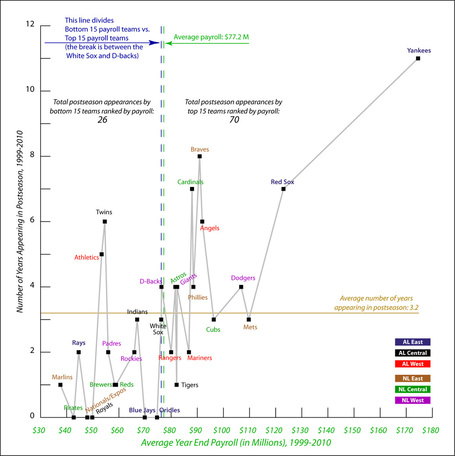 Again, we see a familiar pattern.

There are 8 playoff spots per year. Over a period of 12 years, that's 96 slots for the post season. In a league of 30 teams that had competitive balance, you'd expect each team to go make it to the postseason in 3.2 of the twelve years, or rounding down, about a quarter of the time.

In actuality, only 4 of the 15 low-payroll teams went that often. Meanwhile, 10 of the 15 higher-payroll teams exceed the average, and another two of them equal it. You have to actually count down to the 10th-highest payroll (the Mariners) before you find a team that was below average in appearances.

As the graph illustrates, out of 96 available postseason slots, 70 are filled by higher-payroll teams, approaching three times the number filled by the lower payroll teams.

But the Athletics! The Twins!!

Yes, yes, they are the outliers again. And it has often been suggested that the A's win so often because Billy Beane is truly craftier at this game than most, and the Twins win because they're in a crappy division.

Let's face it: Division structure has to be factored in at some point. We can all agree that the Orioles' front office has had major competency problems over the past decade, but how do you explain the plight of the hapless Blue Jays? Similar payroll to the Orioles, shrewdly spent to produce a winning record over the past 12 years..... yet they are the only team over .500 for the decade to have zero playoff appearances.

Back to the Twins and Athletics. If success is truly tied to payroll, then we would expect these guys to make the playoffs often, but then fail once they're there.

So here's a final chart, which shows playoff winning percentage over the past 12 years: 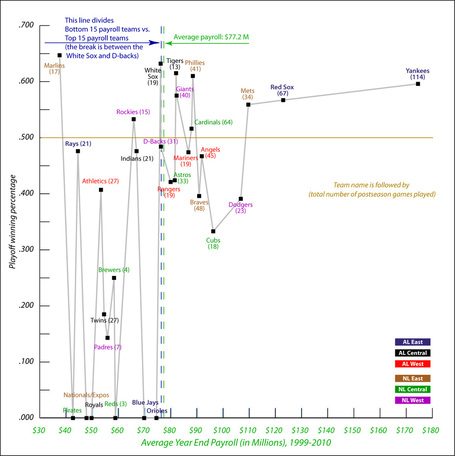 Surprise! It's obvious that Minnesota and Oakland, with 11 playoff appearances between, have consistently found the horses that will deliver them to the promised land of postseason play. But it is just as clear that those same horses give out when they cross the border. Both teams have overall losing records in the playoffs, with the Twins being particularly outclassed. In 6 years of going to the playoffs since 1999, they have only advanced past the first round once. In their last 3 appearances, they were swept, and over their past 5 appearances, they are 2-19. Meanwhile, in their 5 appearances, the A's bowed out in the first round 4 times. The one year they advanced to the LCS (2006), they were swept in Round 2.

We always hear that "the postseason is a crapshoot", and to some degree it is. But the dice are still loaded in favor of teams who can afford to bulk up for baseball's stretch run every August.

Moving past the Twins and A's, there actually are only two teams with below-average payrolls who have a winning record in the postseason over the past 12 years: the Marlins, with their lone Cinderella run in 2003, and the Rockies, who squeak into a positive record because of their early rounds in 2007 (which offsets their eventual sweep at the hands of Boston and their LDS loss to Philly two years later). Apart from these two, the playoffs have been overwhelmingly dominated by 7 mid- to large-market teams: the White Sox, Tigers, Giants, Phillies, Mets, Red Sox, and Yankees. It's all well and good that "25 teams have made the playoffs in the last 12 years" but 15 of those teams have losing records when they get there.

In closing, one last point regarding "revenue sharing", which was supposed to "provide competitive balance" to the game.

It has done nothing of the sort.

There have been 13 World Series since revenue sharing was introduced in 1998, with a total of 26 available slots for teams. With a 30-team league, on average, almost every team should get into a Series once over that stretch, with a few remaining teams being "due."

In reality, the 8 top payrolls above (Yankees, Red Sox, Mets, Dodgers, Cubs, Angels, Braves, Phillies) account for fully half of those 26 slots. The other 13 appearances  are taken up by an additional 11 teams (the Cardinals, Giants, Tigers, Astros, Rangers, D-Backs, White Sox, Rockies, Padres, Rays, and Marlins). That looks a little more balanced until you realize that 7 of those teams (the first seven listed) have a payroll at or above the league average. So in summary, since revenue sharing was introduced, a team with payroll below the league average has only appeared in the Fall Classic 4 out of a possible 26 times. That's a record of .154, which doesn't even approach the Mendoza line.

I understand that a salary cap will not be easy to attain. But I think the MLBPA could be wooed with a higher league minimum and a solid salary "floor" that requires teams to put revenue back onto the field. I worry that another decade like the past one will lead to MLB's diminished popularity in the smaller markets, and in the long run that will hurt the game far more than a cap on payroll.

My spreadsheet (Excel), in case you want to crunch your own numbers.