The View from BrianS's Seat

Share All sharing options for: The View from BrianS's Seat 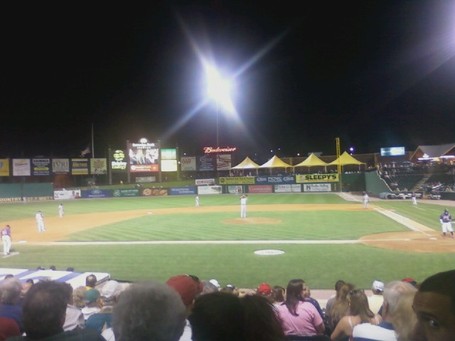 I got several pictures from Camden Chatters that I didn't get a chance to post during the regular season, so I figure with the off-season and winter it might be a good time to look at some photos taken last summer.

BrianS snapped this photo from his seat at the Sovereign Bank Stadium, home of the independent league York Revolution. Brian included some fun facts about the Revs and their connections to the Orioles, namely:

-- Brooks Robinson is part of the ownership group
-- Chris Hoiles was the Revs' first manager
-- Andy Etchebarren is the current manager
-- Former O's who have played for the Revs include Tike Redman, Ramon Nivar, Matt Riley, and Val Majewski.

Thanks for the great photo, Brian!

(This part is unrelated, but here is a fun fact for you: When Matt Riley made his debut for the Orioles in 1999, it was the first time there was a Baltimore Oriole younger than me.)