Below are the results of our community projections for the 2011 Orioles infield. Since Matt Wieters was our first I somehow forgot to ask his games played. Oops!

Each category is simply an average of all responses. I know the math nerds might want to check the numbers, but given the manner in which each was calculated, it'll make sense if they don't all match up perfectly (especially since some people gave really crazy answers that didn't seem to jive).You know what? It must be spring training because we're a pretty optimistic bunch.

Below the jump check out detailed information on each infielder.

It's been said before, but I'll say it again for good measure: 2011 is huge for Matt Wieters. I personally have high hopes for him. Power has not come on for Wieters the way we all thought it would, although as a group we project him to hit twenty HR this season. Individually we run the spectrum from bust (10 HR predicted by Pickford) to God (62 predicted by Buck). Actually let's get that Buck prediction out in the open. This crazy Buck fellow (Showalter? your guess is as good as mine), predicted the following for Wieters: 550 AB, 20 2B, 62 HR, 100 BB, 0 K, .412/.800/Infinity. Only 20 doubles, Buck? Why so pessimistic?

Last year Matt Wieters' slugging percentage was a very disappointing .377. Just one person expects him to actually get worse in that department, and a few people actually guessed that he'd eclipse it by nearly 200 points. Let me tell you something, if Matt Wieters slugs over .500 I will buy each and everyone of you your beverage of choice. Hell, I'll buy you two! Here's a SLG breakdown: 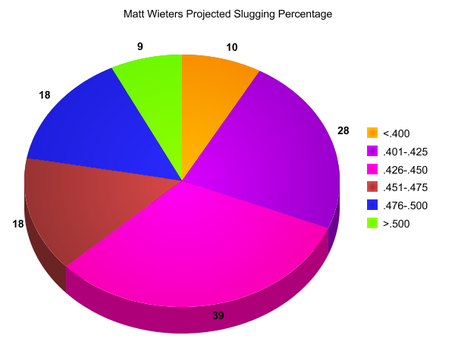 The bonus stat for Wieters was his caught stealing %. A number of people entered 0, which makes me think they didn't know what I was asking for. At least, that's what I'm choosing to believe, and so I threw those out (in case any of those people DID think he'd throw out nobody, I leveled the playing field by also tossing out the two people who predicted he'd throw out 100%). Wieter's CS% last year was 31%, and this year we predict he'll have a success rate of 35%. That's optimistic but not insane.

After a down year, can Derrek Lee rebound? The projected .836 OPS that we came up with suggests that we believe he will, although not to the levels he used to reach. Fair enough. But do we think he'll stay healthy? In the four years since Lee was limited to fifty games due a broken wrist in 2006, he has averaged 148.5 games per season, and never less than 141. Yet fifteen of the forty-nine people who responded believe he'll play 140 games or less, with the lowest being 85. I bet Felix Pie would be ok with that since Luke Scott is the current back up 1B (although Felix will of course tell you he just wants what's best for the team, because he's a good boy).

With the exception of the previously mentioned 2006, Lee's 19 home runs in 2010 was the least he's hit since the year 2000, but only two people predict that he'll hit less than 20 this season. Three people even go so far as to say he'll hit 30. 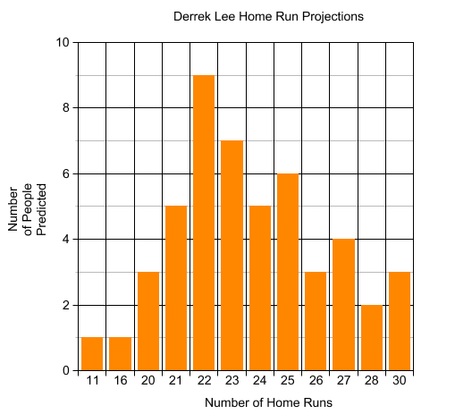 Here's the thing about Brian Roberts. I expect that when he's on the field he'll perform at or near the level we are used to seeing. I just can't get it out of my head that he won't really be on the field all that much. For the most part it looks like you guys agree with me on his performance but not necessarily on how many games he'll play. I predicted 110, a number I actually thought was kind of generous. Organizedchaos agreed with me, and only Eat More Esskay thought he play less, predicting 109 games (EME is always trying to one-up me). 73% of you predicted that Brian Bob will play in at least 140 games. I hope you're right, I really do.

There were few outliers the BA/OBP/SLG category as most of us believe we know who Roberts is when he's healthy. As for the guy who predicted Brian will slug .512, sir I say respectfully that you are hiiiigh.

Given J.J. Hardy's history, it's not surprising that his predictions were all over the place. I think that's pretty indicative of just what we don't know about him. Some people have him hitting 8 HR in 150 games, others have him hitting 25 in just 135 (yeah...that's not gonna happen). Thanks to his injury history he got projections from as few as 100 games played to as many as 154.

Everyone is talking about the improved offense this year, but if Brian Roberts and J.J. Hardy each play in just 100 games, well, that's a WHOLE lot of Cesar Izturis.

There are really only two things people focus on with Mark Reynolds: strikeouts and home runs. There is usually also talk of his awful batting average in 2010, but I think we all know he's not going to hit .300. I did find some of the On-Base Percentage responses to be head scratchers, though. For example, four people predicted that Reynolds would have an OBP of .300 or less. Even last year when he hit only .198, Reynolds had an OBP of .320, and I don't think anyone really expects him to hit less than .200 again this year. For reference: the lowest OBP predicted for Reynolds, .255, would be 22 points lower than Cesar Izturis' OBP in 2010. 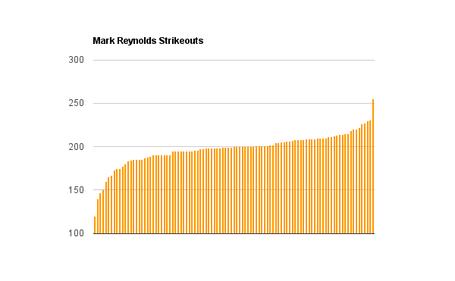 As for that other thing Reynolds does, most people here predicted Reynolds would be in the mid thirties, HR-wise. I'll take that. The lowest prediction was 19 in 144 games, with the highest coming in at 57. For the record, Mark Reynolds has never hit more than 44 home runs, and that was in the NL West, not the AL East. 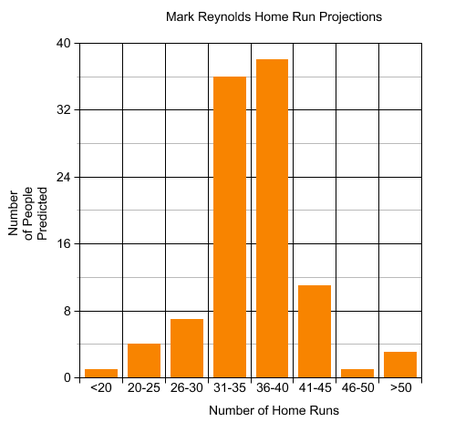