O's beat Pirates despite Bergesen's second rough outing - baltimoresun.com
The Orioles rallied to beat the Pittsburgh Pirates,11-8, Thursday night, but they did it in spite of a second consecutive rough outing by Brad Bergesen.

Pirates lose to Orioles, 11-8 - Pittsburgh Post-Gazette
"Joel Hanrahan, set to be the closer, was tagged for five hits and four runs in the fifth inning, as the Baltimore Orioles rallied from an early three-run deficit, then held off a late rally to beat the Pirates, 11-8, at McKechnie Field."

Orioles Insider: Adams, Tatum lead Orioles' hit parade
Vladimir Guerrero hit a HR, Craig Tatum went 3-for-4, and a bunch of other players hit well against the worst team in the NL in 2010. Woo-hoo!

Orioles: Gonzalez healthy, confident - Carroll County Times: Orioles
Michael Gonzalez just knows he's going to have a better year this year. Maybe it's because he's not lying to the training staff about being secretly injured this time? That would be a good start.

Ex-Oriole Atkins looking to catch on with Pirates - baltimoresun.com
"It was actually fun once you kind of got over the fact you are at home or what-not. You kind of think back and realize you haven't spent any time away from baseball, ever, in the summer," Atkins said. "It was enjoyable, for what it was, and now I am excited to get back to work here." Home or what-not. Sounds like a punk band. Or maybe a Celtic ensemble that plays on weekends, populated by a bunch of divorced lawyers and accountants. One of the two. You decide.

Orioles Insider: Bergesen calls outing unacceptable; Orioles lead 8-4 after six
"I never like going out there and having an outing like that, but at the same time, it’s early, I’m still working on things. Outings like this are unacceptable, but I’m not getting down on myself or turning into a mental head case by any means. I just know what I need to work on." Sure, Brad. Just take it one game at a time. Stay within yourself. Give 110%. Be a gamer. Play the game the right way. Get your uniform dirty. And tip your bartender and waitresses. Sit up straight, don't slouch. And pick up your socks, your mother doesn't live here. Were you born in a barn? Are you listening to me, young man?

Who will be the fifth starter in the Orioles' Opening Day rotation? - baltimoresun.com
Five pitchers are in the running for the last spot in the starting rotation. I think Rick VandenHurk can pick out a comfy spot on the bullpen bench by now, and Zach Britton's gonna need at least a one-month lease in Norfolk for April.

For Showalter's Orioles, Wieters is a work in progress - Washington Post
"His main message to me is that this team has the talent to compete," Matt Wieters, 24, said, "and it's up to me to get these [pitchers] to believe that it doesn't matter who's in the box . . . that they're going to go out there and beat them that day." Hey, Matt, while you're at it, hit .285 with 30 HR, too.

Steve Melewski: Third-round pick Klein out to show his stuff in 2011
Dan Klein is excited to get the season started. Well, at the bonus he signed, I'd like to think he's not bored with baseball just yet.

School of Roch: Updates on Roberts and Uehara
Brian Roberts could take the field again today in game action, and Koji Uehara isn't dead just yet. But he isn't throwing off a mound yet, either.

Health is a welcome relief for O's bullpen - baltimoresun.com
Well, they're healthy now. But we're just a few minor tweaks and pulls away from a Monty Python sketch, aren't we? You're not fooling anyone, you know...You'll be stone dead in a minute.

Orioles Insider: Five Orioles who have helped their roster chances; five who have hurt them
Nolan Reimold and Zach Britton have helped increase their microscopic odds to merely improbable, while Mr. Cut&Paste and Jason Berken haven't done themselves any favors.

The Schmuck Stops Here: Homeward bound
Peter Schmuck is on his way back. Red Lobsters all across Central Maryland have gone on high alert.

Revamped Baltimore Orioles looking forward to Opening Day, but the club needs to get healthy | orioles.com: News
Britt Ghiroli gives an overview of what's transpired thus far at Spring Training. Funny, she does so without making any jokes about eateries or waitresses or lost luggage. Didn't know that was possible at an Orioles camp.

Orioles' move west could provide blueprint for Nationals - Washington Post
The Nationals are thinking about moving to western Florida, as did the O's. But their options are nowhere near as appealing as the Sarasota complex the Orioles have renovated.

Orioles 40 Man Roster Preview – #25 Derrek Lee | Baltimore Sports Report
"Even though those were poor numbers by Derrek Lee’s standards, they still would’ve been decent numbers in Baltimore considering the way the O’s first basemen performed last season." A bad year by Lee would be better than most years at 1B for the past decade by an Oriole. That's kinda sad.

Baseball Rivals Play Dueling Cameras  - Kotaku
"Kotaku may have kicked off a fad last year, with our post on how to make your video game baseball presentation conform to real life broadcasting angles. MLB 2K11 directly cited the work as an inspiration behind its new broadcast presentation. MLB 11 The Show was assuredly thinking the same thing when it introduced realistic camera views into its game.?"

Baltimore Orioles: Summing up 13 straight losing seasons in an acoustic spin on 'Hurt' - baltimoresun.com
"In the video, which can be found on FoxSports.com, a guy named Bernie busts out the acoustic guitar and belts out lines such as "A crushing losing streak goes on and on, it never ends" and "Any kind of hope will be gone after spring." Yes, it's as bad as the O's have been for the last baker's dozen years.

YouTube - Managers Corner (NSFW language)
As my last clipping, I present you with Earl Weaver at his best. For some reason, the animation used on this version absolutely mesmerizes me every time. Wonder if Alice Sweet ever found out when to put her tomato plants in...

And with that, I close my tenure as an active writer/editor/mod at Camden Chat. It's been a fun ride. I'm proud of most of what I wrote here, and I'm proud of what this site has become. I'll still be around in the comments, but not as much. I'll still contribute every now and again when a topic interests me. Thanks for putting up with my (mostly bad) sarcasm and puns in these clippings, and play nice with whomever takes over should this feature continue. 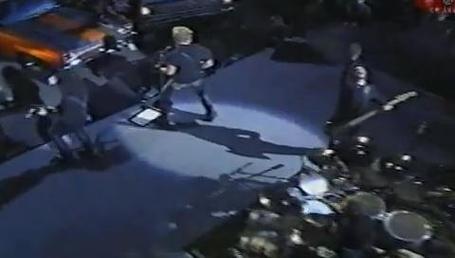 Open Thread seems as though it never existed. Death greets me warm. Now I will just say goodbye...