The Most Birdland Player Contest - but just what *is* Birdland?

Share All sharing options for: The Most Birdland Player Contest - but just what *is* Birdland? 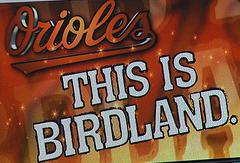 One of the regular features here on Camden Chat during the regular season is the Most Birdland Player contest. In the post-game recap for every Orioles victory, there will be a poll to select the Most Birdland Player of that individual game. From time to time this choice generates some discussion, as people discuss amongst themselves while they try to answer the question: what IS Birdland?

I'm not talking about the Jaco Pastorius kind of Birdland either, although hey, if that's your thing, more power to you. Part of what makes the poll so interesting is that for each person there is a different idea of just what is Birdland. But for the purpose of the contest, it's worth remembering the genesis: that moment where Birdland transcended the mere boundaries of being a noun and it became an adjective to symbolize all that is potentially (and actually) great in life.

Let us hearken back to those halcyon days of early April in 2008. The team was in the midst of unveiling a new ad campaign, telling us: This Is Birdland. This being Oriole Park at Camden Yards, the home nest of Birdland, where Orioles fans of all stripes can come and find their happiness. Then, in the fifth game of the season, against the Seattle Mariners, the Orioles found themselves down 2-0 entering the bottom of the 9th inning. What happened next? Let's take a look at the words of our Camden Chat grandfather, Scott Christ, who, in his exultation of that great, improbable victory – raising the team's record to 4-1, what a concept! - revealed to all of us faithful the divine message of Birdland.

If you were not watching the game, it's hard to really describe the jubilation from the sheer unlikely hero that Luis Hernandez was in this game. Hell, he was only in a position to win the game after a bizarre stream of events, including the tying run scoring on a wild pitch of ball four. Then up came Luis, who would later take his infamous place as part of the Five-Headed Monster at shortstop – but not this day.

Do you remember playing in Little League and that kid would come up to bat - hell, maybe you even were that kid - and everyone on the other team would start shouting, "Move up!" They knew that kid was never going to hit the ball hard, probably on the ground and not even out of the infield. Not only were the infielders drawn in, but the outfielders were drawn in too. Jay Payton was on second base and Ramon Hernandez was on first base, and there were two outs, so it wasn't like they needed to stop anyone from tagging. They moved in just because Luis Hernandez was not someone they believed capable of driving the ball.

Luis got his pitch and he drove the ball over the heads of every player on the field. He hit a baseball probably as hard as he was capable of hitting a baseball. It sailed into deep center (baseball-reference tells me CF-RF, but I remember it being center, a tad towards left – memory is a funny thing), where any reasonably-positioned center fielder would have run it down and sent the game into extra innings. But no: the center fielder was unbelievably shallow, and he was powerless to do a damn thing as the ball dropped in just short of the warning track, rolled to the wall, and Payton raced home easily and met every Oriole at the plate. The Birds were triumphant, and in that moment Birdland was among us.

Of course, misery followed in 2008, and 2009, and four months of 2010, as you well know, but none of that can take the moment away from us, nor our irrational hope in any given game of that improbable comeback. You never know which day will be the one where you come back from nine runs down against the Red Sox thanks in part to an Oscar Salazar grand slam.

Birdland is the unexpected. Birdland is that thing that happens where you're shouting in glee in your empty apartment, or you're running around through the house screaming when nobody else even really cares who won or lost the game. Birdland is the shining moment, the ray that pierces through the gloom and reminds you why you're still a fan of this team after so many years of losing. Birdland is the belief that as great as today just was, tomorrow might be even better.

Birdland is in you, and it is in me, and every time the Orioles win it's in them too. Here on Camden Chat, it is your solemn duty to tell the world who was the MOST Birdland. Are you up to the task? Can you judge wisely and add your voice to the clamor? We need you to help us shout it across the rooftops, to remind the world that we are here and that no matter what else might happen, this much is true: THIS IS BIRDLAND!

Maybe this year will finally be the year where after more games than not we are pleased with the result. Now that really would be Birdland.