Yankees 6, Orioles 5: Why hast thou forsaken us, Buck?

Share All sharing options for: Yankees 6, Orioles 5: Why hast thou forsaken us, Buck?

"Believe me, I know the save rule and, quite frankly, it doesn’t carry much weight with me. I like the win rule a little bit better." -Buck Showalter, 8/3/2010

Buck made that quote back when he was wooing us, trying to get us to follow him blindly into battle. It went over so well that they even made a commercial out of it that we hear it on the radio and TV every day. Surely that means he believes it, right? Well, folks, the honeymoon is over and Buck Showalter is just like every other manager who relies on a designated closer even when said closer has pitched terribly the entire season.

Jake Arrieta pitched a hell of a game tonight. A hell of a game. He was pulled after six innings and 90 pitches for reasons I didn't understand. He'd given up three runs but fought back hard in the sixth. He was replaced with Jason Berken, who normally has been quite good, but who gave up a run to make it a 5-4 game. Jim Johnson came on for the 8th and got into trouble despite throwing nasty pitches, but got out of the jam.

So the 9th inning, a one-run lead, Kevin Gregg has pitched like garbage the entire season, so if Buck values the win rule more than the save rule he won't bring him in, right? Wrong. It was all lip service, O's fans.

When it became a one-run game, way back at 9:30 PM, EME sent me a message on gchat: "We both know how this game is going to end. I'm not even going to say it, but we know." At 10:09 PM, after the damage had been done but before the game was over, I got another message on gchat, this one from my boyfriend: "When I saw Kevin Gregg was coming in, I started watching Conan. I guess I made the right choice"

I'd put some of the comments right here from the gamethread when it was announced that Gregg was coming into the game, but they are not at all front page friendly. Suffice it to say that everyone watching this game knew what was going to happen. Everyone who values the win rule knew it was a bad idea to bring in Kevin Gregg. You cannot tell me that Buck Showalter did not also know that. Of course he did. But he brought him in anyway because he's the closer and that's his job.

And what happened? You know what happened. Jorge Posada hit a leadoff home run to tie the game and the Yankees went on to win it in the bottom of the 10th.

I feel that I've lost a little bit of my innocence tonight. 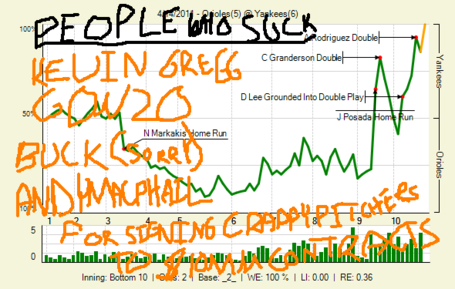