Jack O'Boskie out; Creepy Clay in

Share All sharing options for: Jack O'Boskie out; Creepy Clay in

You've probably already heard, but Clay Rapada has been called up to the O's bullpen with Chris Jakubauskas going on the DL with a groin injury. Godspeed, Jack O'Boskie. We've discussed it before, but Rapada is seriously creepy looking. I mean obviously if he can pitch well I'm happy to have him, but just look at him. He looks like he wants to eat me (as in, a cannibal, sickos). 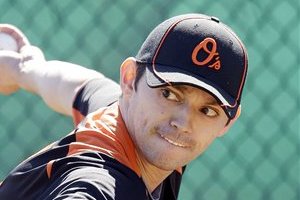 Rapada is a lefty and according to Jeff Zrebiec, the move makes a lot of sense:

First of all, Michael Gonzalez is really struggling, making it tough for manager Buck Showalter and pitching coach Mark Connor to trust him right now in a tough spot. Second, the three teams that the Orioles play over the next 11 days – the Minnesota Twins, New York Yankees and Boston Red Sox – are absolutely loaded with left-handed hitters so having two lefties in the bullpen could be crucial.

But back to Creepy Clay. When he was signed to a minor-league deal this winter, Andrew_G gave us his major-league stats and declared Clay a possible commodity if used correctly (i.e. only against lefties). Rapada's minor-league stats tell a similar tale, although his walk numbers are better.

Maybe Rapada WILL end up being the Will Ohman of 2011. And given the troubles of the starting rotation, we need the bullpen to be as good as possible (and really, outside of Gonzalez and the reviled Kevin Gregg they haven't been THAT bad -- mop up duty not included).

Welcome back to Birdland, Clay. Try not to suck.