Taking pitches and walks in the AL East

Share All sharing options for: Taking pitches and walks in the AL East

Lost in the disgust that was last night's game is the fact that the Orioles took five walks. They came into the game averaging 2.4 BB/G, and in their seven game losing streak they were averaging 2.1. It didn't hurt of course that Francisco Liriano threw a fair amount of balls (of course they swing at garbage all the time so maybe I should give them some credit). The Orioles worked a three-ball count in last night's game ten times, resulting in five walks, a single, and four outs. The O's took more pitches than usual, with Brian Roberts, Derrek Lee, Mark Reynolds, and Matt Wieters all averaging four or more pitches per at-bat. Vladimir Guerrero saw fifteen pitches in four at-bats, which is like a normal batter seeing forty.

It seems that a constant gripe among the O's faithful is having to watch hitters swing at horrible pitches, refuse to work the count, etc., especially in comparison to the other teams in the AL East. It's only been fifteen games, but I thought it might be interesting to take a look at how the five teams match up to this point, then revisit it every month to gauge any improvement. It's likely it'll just end up being an exercise in frustration, but really, isn't being an Orioles' fan at all an exercise in frustration?

Check out the charts and numbers below the jump. 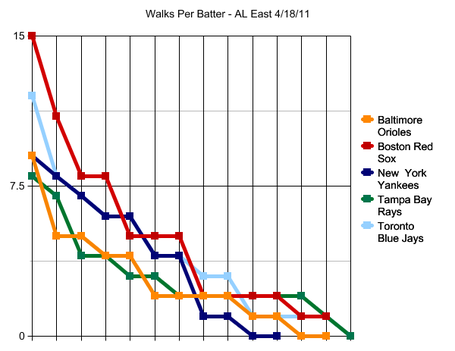 Not included in the chart are Gustavo Molina and Eduardo Nunez for the Yankee, and Evan Longoria for the Rays. 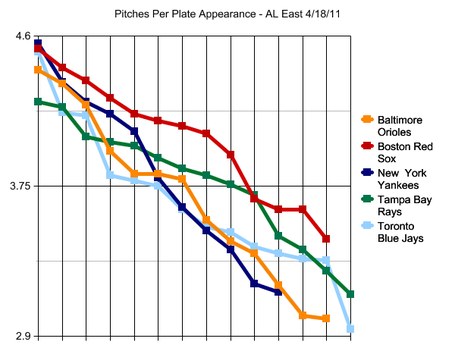 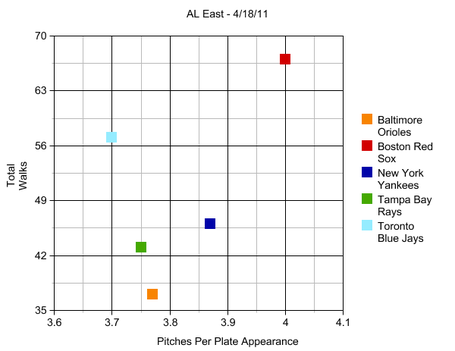 The natural assumption is that the more pitches a team sees, the more walks they'll have. That for the most part is true across baseball, but here in the AL East the Orioles see more pitches per plate appearance than both the Rays and the Jays, but still have less walks then both. What is going on with the Jays? Yunel Escobar has the second most walks on the team despite being near the bottom of the list in P/PA. It'll be interesting to see if he and the Jays can keep up that pace.

It's not shown here because I only plotted the AL East, but here's another weird fact: the Royals and the O's both see 3.77 pitches per plate appearance, but the Royals have sixty walks to the Orioles' thirty-seven.