What do you call a starting pitcher who gives up four runs in four innings, including two home runs, one of which was to a White Sox batter with a .259/.277/.319 slash line? A Baltimore Oriole.

Jo-Jo Reyes is who we thought he was. He gave up a home run to Carlos Quentin, which is somewhat understandable, as it was the 24th of the year for Quentin. Reyes also surrendered a home run to Brent Morel, which isn't understandable. He walked two and struck out none. It took 69 pitches to get through the four innings, and in the post-game press conference Buck Showalter said he was on a 70-75 pitch limit, so that was that for Reyes. If this is what we have to look forward to in the rotation for the remainder of the season, well...

The Orioles only managed to touch Gavin Floyd in one inning, the bottom of the fifth. Matt Wieters, Felix Pie and Robert Andino all started with singles, loading the bases with nobody out. It also didn't score any runs, because they were station-to-station sort of singles. J.J. Hardy grounded into a fielder's choice to score the first run, followed by a Nick Markakis single to score a second run. Then Adam Jones hit what should have been a GIDP ball but was misplayed by White Sox shortstop Alexei Ramirez and everyone was safe, scoring the third run.

After that sequence, Markakis was on second and Jones was on first with only one down. Things might have almost looked promising, especially when Markakis and Jones executed a double steal, with Jones sliding safely into second as Markakis beat the tag at third base. Despite the indisputable visual evidence presented to him (see below the jump), third base umpire Phil Cuzzi called Markakis out on the play. In the ideal world, this is where visual replay would salvage the mistake made by Cuzzi, who based on his strike zone in the 9th inning last night and this play just seems to have it out for the Orioles in this series. Buck Showalter came out, understandably hot, and was ejected for his trouble, giving a little dirt-kicking show (but not much of one) before exiting into the clubhouse.

No one of you will be surprised to hear that Vladimir Guerrero promptly grounded out to third base, ending the inning. The Orioles got nothing else, despite a leadoff double by Pie in the bottom of the 7th. Sacrifice bunts are no one's friend except for the defending team. Floyd ended up going 6.2 IP with the three runs surrendered. He gave up seven hits, one walk and struck out four.

Chris Jakubauskas was forced into the role of bullpen sacrificial lamb by Reyes' early exit, but he actually pitched four scoreless innings, keeping the deficit where it was instead of letting things get out of control like so many other O's games we've seen this season. Of course, the bats didn't reward this feat of unexpected competence, but that's how it goes. Jason Berken recorded three perfect outs in the ninth.

In tomorrow's game, Tommy Hunter takes another crack at starting for the Orioles. He'll be opposed by Philip Humber. 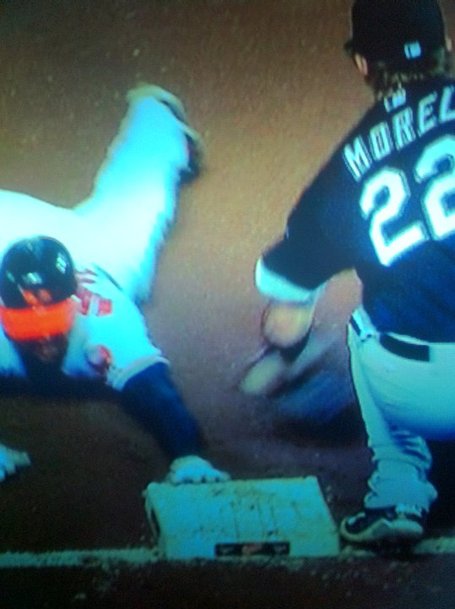