The view from your seat -- with a story!

Share All sharing options for: The view from your seat -- with a story! 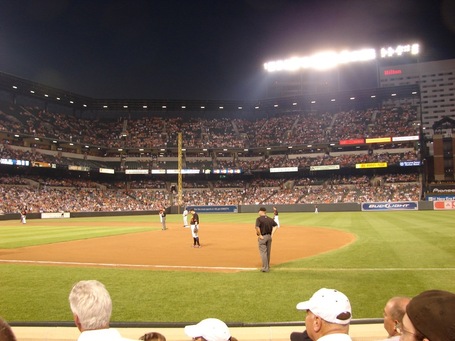 I've gotten a big response to this feature, so big that I'm backlogged with a quite a few pictures to post. My favorite thing about this has been getting to hear stories from people about their experiences with the game of baseball. You've already seen photos from a ballgame in Afghanistan and a minor league game with faulty sprinklers, and I still have in the queue a picture from a cross country baseball road trip, a photo taken from an official scorer who is a lifelong O's fan, and more. It's really great that no matter how awful our baseball team, no matter how much they disappoint us, we are all still able to have fun with the game.

The picture above is from July 18, 2008, and was sent to me by a gentleman named Yann. Yann is a native of Maryland, but has lived in Scotland for five years. Yann attended the game with his British lady, and it was her first experience with baseball. Click through the jump to read the story in Yann's words.

Camden Yards, I think July 18th 2008, versus Detroit. I'm a longtime O's fan living in Scotland for the past five years with my British partner. Of course the first time we went to visit my family during baseball season I had to take her to a game. We were planning on getting the $8 bleacher seat tickets, but as we walked up the concourse some guy tapped me on the shoulder and asked me where we were sitting. I told him I didn't know, we hadn't gotten our tickets yet, and he said "You're sitting with us now", pushed two tickets into my hands and disappeared into the crowd. We were really confused to say the least, particularly when we saw that they were 5th row, 1st base side, $45 each. We went in, got escorted to our leather-bound seats by an usher who wiped them down for us, and met the guy who had given us the tickets. We explained that this was my partner's first MLB game, and her first time in Baltimore. As the game progressed I had to explain everything to her, often using cricket analogies (the sport, not the insect), and everyone around us got super into explain the minutiae of the O's and baseball in general. Classic charm city stuff (except the tools from New Jersey who were sitting behind us heckling the players the whole night). Anyway, the game ended (I think the O's won?), it was a fireworks night, and the guy who gave us the tickets refused any money, telling us "Welcome back to the USA". Awesome night. Also, my partner got to try Coors Light for the first time, which was pretty hilarious, and led to a discussion about tailgating, which she had only ever heard references to in "Friends".

Not a bad story, huh? Yann's partner got a great introduction not only to baseball, but also to our fine city. I love the people sitting around joining in to tell her all about the Orioles, and the guy giving away the tickets. It was an all-around good showing from the citizens of Birdland, AND the O's won the game.