Share All sharing options for: Angels 7, Orioles 1: The disaster bus 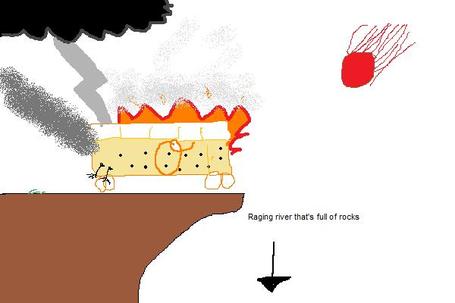 Six hits off a guy for the Angels who hadn't started a major league game in four seasons, including loading the bases with no one out in the fourth inning and failing to score thanks to a K-GIDP combo from our 4-5 hitters. Vladimir Guerrero is such a great cleanup hitter, isn't he? Four errors, with two more that could have been errors but were scored base hits. Three of these errors were committed by Blake Davis at third base, who probably never should have been playing third base to begin with. Brian Matusz entered the game with an 8.63 ERA and managed to leave the game with a higher ERA than he started with.

Also, Felix Pie fell over while losing a fly ball in the sun. This was scored a double. He later misplayed another ball into a double and nearly had Jim Palmer freak out on the MASN broadcast. "It's a day game! Play deeper!"

Tomorrow begins a four-game series against Minnesota. They will be the last four games the Orioles play against teams that currently have a sub-.500 record. There are 34 games remaining after the Minnesota series. 27 of those 34 games are against AL East teams. The matchup for the 8:10pm start is expected to be Zach Britton for the Orioles against Carl Pavano.