A Portrait of Brian Matusz as a LOOGY

Share All sharing options for: A Portrait of Brian Matusz as a LOOGY

In his final game of 2011, Brian Matusz entered the fifth inning sweating but somehow holding on. It was 3-3 in Detroit and Matusz had thrown 63 pitches. He must have known that his season-long struggle was nearing an end, and a part of me thinks that surely must have come as a relief. Matusz would later call 2011 the toughest year of his life, the first time he really struggled and couldn't bounce back. Knowing the end was coming must have eased the burden a little bit. Knowing he had a chance to keep his team in the game - the O's had just tied it up in the top of the inning - must've helped, too.

The top of the Tigers lineup waited for him. Five batters later Victor Martinez blasted a hanging breaking ball into the stands. 6-3 Detroit. Then Alex Avila stepped into the box. Avila quickly fell behind before waving helplessly at a two-strike curveball to end the inning. Matusz ran off the field, his season having finished in an altogether typical fashion: he put the game out of reach for the O's (who would lose 10-6) but literally finished on an up note, if you care to play the extreme optimist.

I don't know if this post is going to exactly raise the curtain on Matusz's struggles in 2011. It is, however, obvious to me that the context with which we will experience his Spring Training and early 2012 is severely lacking and I mean to partially rectify that. In search of a more detailed examination on the erstwhile ace-in-training, I have turned to the MLBAM and Sportsvision Pitch F/X library. The pitch classifications we are about to parse through are my own, though I did lean on the new Player Cards at Brooks Baseball for guidance.

Today, as you may have guessed, we're looking just at left-handed hitters.

It is no surprise that his strongest overall performance against lefty batters came in the second half of 2010 - the batting line against Matusz was just .182/.280/.182. It is equally no surprise that his weakest performance came in June 2011, when lefties hit .346/.357/.808. In the former, Matusz allowed hitters the fewest balls in play and the fewest of those balls went over the fence, while in the latter the exact opposite scenario unfolded.

Looking deeper, we can look at each of his five pitches and detect some correlating evidence for these shifting K/BB/HR rates. Below is a graph of the counts all of Matusz's pitches recorded by the Pitch F/X cameras. The graph displays the number of each pitch which were thrown in the strikezone (to the left of the line) and the number of each pitch thrown outside the strikezone (to the right), along with which of those pitches were swung at and missed (yellow). Additionally, the green area is the number of pitches outside the strikezone which elicited swings but not misses (I don't care about pitches fouled off or put in play from within the strikezone). Click the image to enlarge it: 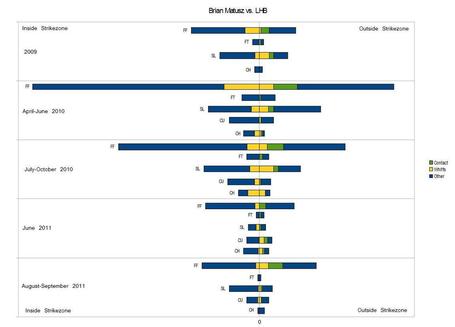 There's a lot of information in this chart, but we can begin to see an image of Matusz and how he goes about getting lefties out. He throws primarily his four-seam fastball and a slider; these two pitches account for 80.21% of all of his pitches. He does mix in the curveball and change-up, and at his best (second half of 2010) used the change-up as a strong swing-and-miss compliment to his already strong fastball/slider combination. When his walk rate spiked in the first half of 2010, it was likely due to an inability to throw quality sliders, as that segment of his career saw by far the largest percentage of sliders taken outside the strikezone.

2011 was of course the worst total time of Matusz's big league career (and likely his entire life so far), and while we can see that he did not walk lefties more than would be expected, he did have a hard time striking them out or indeed even getting many swings and misses at all out of them.His fastball velocity was far down in June (averaging 87 MPH), and you can see the effectiveness of the pitch was basically nonexistent.

After his return in August, the fastball's effectiveness returned along with, perhaps as a causation, perhaps as a coincidence, some of his velocity (averaging about 89 MPH). but look at his secondary pitches throughout 2011. They all suffered terribly, especially the critical slider. What happened here? Let's compare the pitch movements (minus gravity) from 2011 as compared to 2010 (clickable to enlarge):

There are differences: the straightened-out fastball and change-up, a little less sink on the slider and change. But largely I see some similar looking movement. Consulting the player card on Brooks Baseball more or less confirms it. The following info is average pitches as taken from Brooks Baseball (vertical movement here includes gravity):

Focusing on the critical slider, is the difference in sink appreciable enough to account for the disappointing performance? Let's look at the pitch's placement, as seen from the catcher's point of view (clickable to enlarge):

Matusz attacks the outside lower corner with the slider, but in 2011 failed to ever establish the pitch on the corner. Instead, it came in too high, as we might have guessed based on the movement, and too close to the center of the plate. His slider command left him, and he was eaten alive.

And then there are the home runs, the biggest issue of 2011. In 2009 and 2010, lefty batters hit four total home runs off Matusz. In June 2011, they matched that total and then added two more in August/September. Matusz has always been a fly ball pitcher because of the rising action on his four-seam fastball. Fly ball pitchers have a tendency to give up the long ball. But the slider graphs above make me think: where in the strikezone did the home runs come, and on which pitches? 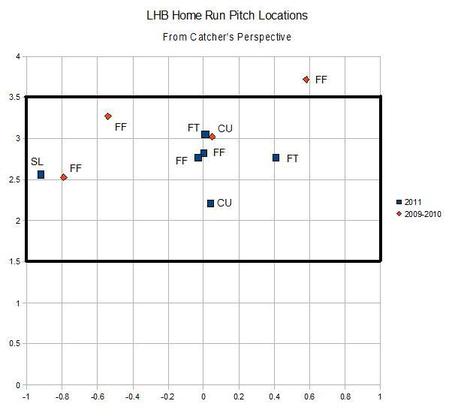 Of the 2011 Home Runs, the four-seamers, curve, and the inside two-seamer all came in June (from, respectively, Jon Jay, Joey Votto, Votto again, and Johnny Damon). The fastballs were all under 88 MPH. The upper two-seamer (91MPH) and the slider came in a single game in August (courtesy Curtis Granderson and Robinson Cano, respectively).

These appear to all be mistake pitches. A hanging curveball and slider as well as slow, straight fastballs thrown basically in the middle of the plate are just asking to be made into souvenirs. Let's define "down the middle" as between 2.5 and 3 vertically and between -0.2 and .02 horizontally. In 2011 7.05% of all of Matusz's pitches vs. LHB were thrown down the middle, compared to 2010's 5.11%. That fact, combined with velocity issues and a lost feel for offspeed pitches, it is not surprising to see the home run rate spike.

I'm not sure how much further to take this train of thought. I certainly invite continuations or other ruminations in the comments.

Vuff previously suggested that the narrative of "Matusz's fastball has left the building" was not an accurate one. In terms of left-handed hitters, where Matusz admittedly is given a natural platoon advantage, this holds true. While the fastball and its lost velocity can be reasonably blamed for many of Matusz's problems in June 2011, The pitch's isolated effectiveness returned after his trip to AAA. It was instead his offspeed pitches and the failure to command them, particularly the slider, which doomed Matusz.

As we move into 2012's Grapefruit League, I suspect that many eyes will be on Matusz trying to determine how healthy/effective he is. As we've seen with Chris Tillman, that means much of the reporting will be on his radar gun readings. While those readings are certainly important, we know now that our focus should be on the effectiveness of the offspeed pitches, which are much more difficult to determine in Spring Training.

Of course, next we must look at the other, arguably more important side of the equation and see how Brian Matusz failed to perform against right handed batters.