Share All sharing options for: April 1997: Building on the promise of 1996 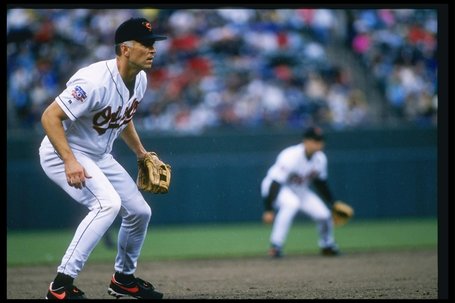 Coming out of Spring Training 1997, optimism was high in Baltimore. The Orioles were coming off of their first playoff appearance in thirteen years and had improved over the off-season. While the 1996 Orioles could slug (they scored 949 runs, good for third in the league), they weren't so great with the pitching (903 runs allowed, fourth worst). To improve they signed Jimmy Key and Scott Kamieniecki away from the defending Word Champion Yankees to bolster the rotation.

The offense they tinkered with a bit, but you don't do much to a lineup like that, frankly. They lost Bobby Bonilla to free agency (GM Pat Gillick, of course, had wanted to trade Bonilla during 1996 but was vetoed by team owner Peter Angelos, with the result being the Orioles taking the wild card. Some say that's the beginning of Angelos not trusting his GMs, but who knows). To replace Bonilla the O's signed Eric Davis. Eric Davis, who is awesome. Now, I won't pretend that you don't know what happened to Davis this season, but being that he wasn't diagnosed with cancer until May, he did in fact spend April 1997 kicking the crap out of American League pitching.

The other big off-season addition, of course, was Mike Bordick. Bordick came to the Orioles as a Cal Ripken approved shortstop replacement, allowing old Cal to finally move to third base. B.J. Surhoff, who spent a large chunk of 1996 at third base, moved to left field.

The starting rotation at the beginning of the year included Key, Kamieniecki, Mike Mussina, Scott Erickson, and Shawn Boskie. Key had a fantastic April including six shutout innings on Opening Day and a complete game shutout on April 13th, and other than his first start of the season when he was clobbered by the Rangers, Mussina was great as well. As for Shawn Boskie, well, he was demoted to the bullpen after two starts, kicking off a rotation fifth place in the rotation that would over the season include Rocky Coppinger, Rick Krivda, Mike Johnson, Nerio Rodriguez, and Esteban Yan.

Why is Brady DH'ing, you ask? Seems pretty strange given his defensive abilities, but some of you may remember that in Spring Training 1997, Brady cracked some ribs. Instead of going on the disabled list, however, Brady spent the first three weeks of the season as designated hitter rather than go on the disabled list. For cracked ribs. During his playing days Brady had a reputation for being a pretty boy and people liked to poke fun at him, but that is bad ass. Other stories, of course, include him getting hit by a bus and still playing that night and passing kidney stones between innings.

But really, playing with cracked ribs? That has to affect his performance, doesn't it? Surely he'd be better off resting and coming back strong to help the team, right? No, not really. Brady DH'd every game from Opening Day through April 20th, and in that time he hit .380/.537/.540. His power numbers were down a bit with only two home runs and two doubles in that time, and he couldn't steal bases the way he usually did, but he took thirteen walks in fourteen games. He moved back to CF on April 21st and for the entire month hit .380/.515/.557. Not bad for a dude running around with broken ribs. Seriously, what an awesome player he was.

Other notable performances in April: Eric Davis slugged .705 with five home runs and five doubles, Roberto Alomar got off to a slow start (after missing the first five games due to suspension over that whole spitting incident) and only had an OBP of .300 for the month. Hammonds, getting a chance with Anderson injured, did not make the most of it. He OPS'd just .677 and couldn't get on base more than about 30% of the time. Chris Hoiles was awesome as course, getting on base at a .413 rate and hitting three home runs for the month.

And how about Mike Bordick, Cal's replacement? Well, let's just say he wasn't brought to Baltimore for his bat. And Cal had his finest month of the season in April, hitting .316/.350/.526