Brian Matusz Without the Platoon Advantage

Share All sharing options for: Brian Matusz Without the Platoon Advantage

Here at Camden Chat we offer our sincerest congratulations to Brian Matusz for somewhat improbably recapturing a starting job on the 2012 Orioles Opening Day roster. Matusz dealt with a horrific year filled with injuries, coaching changes, and conditioning problems in 2011, and put up one of the worst seasons ever. But that's all for the history books now, because Brian Matusz is back! He's had a healthy and encouraging spring training, and I can see the glimmers of hope for him creeping in around Birdland.

But two questions remain: what exactly were Matusz's issues in 2011, and what measuring stick can we use in the early goings of 2012 to figure out just how "back" he really is? If you are on the Twitter and follow the various Oriole reporters, the answer you might have in mind is that his fastball velocity was down in 2011, but it's been back up this Spring, and as long as it's up he should be a good pitcher. I disagree with this analysis.

Previously on Camden Chat, we learned that Brian Matusz's struggled in 2011 against left-handed batters, and that it wasn't based on his fastball. Instead it was shoddy command, particularly of his primary offspeed pitch the slider, which drove down his strikeout rate and drove up his home run rate. Today we'll look at his performance (or lack thereof) against right handed batters.

We divided Matusz's career into five distinct time periods when we last looked at him, so let's stick with it. The periods are his introductory tour in 2009, the first half of 2010, his outstanding second half of 2010, June 2011 when he was clearly still affected from his season-opening DL stint, and finally August/September of 2011 after his return from a trip to AAA Norfolk.

Similarly to his struggles with lefties in 2011, it is the inflated number of homers and the deflated number of punch-outs that highlight his most difficult periods. We know that there is a strong correlation between strikeout rates and the rate at which pitchers induce swings and misses, so let's breakdown Matusz's offerings in each time frame by pitch type and general result. In the following chart, you can see how many of each pitch were thrown, whether it was thrown within the strikezone (to the right of the line) or out of the zone (to the left), how many of those pitches were swung at and missed, and for pitches out of the strikezone how many were swung at and hit for either a ball in play or a foul. Intentional balls have been excluded and foul tips count as swings and misses. Click the image to see a full size version: 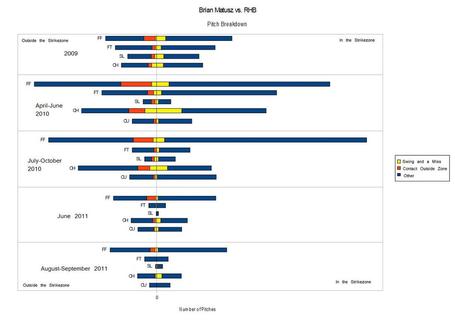 We can begin to see how Matusz attacks opposite-handed batters. For a guy with the reputation of "pitching backwards", you can see that the fastball (whether two or four seamed) is still the primary weapon, thrown about 60% of the time. The primary offspeed pitch is the change-up, which makes sense; against lefties the sliders moves down and away and against righties the change-up has the same relative action.

Notice, also, that in August and September

The most compelling way to read this information is to say that Matusz's four-seam fastball's effectiveness took a cliff dive, and without that pitch - either to set up his other offerings or simply as his most common pitch - he was hopeless. We know the four seamer averaged 87.4 MPH in June 2011 but then averaged 90 MPH in August and September, which was very nearly its average speed in 2010. Despite the continued obsession with Matusz's radar gun readings this Spring, fastball velocity was not his main issue in 2011.

Then what was? Look at the pitch movement differences between 2010 and 2011, and focus on the four seam fastball (FF):

The pitches don't look wildly different, but the fastball (the blue blob) is noticeably closer to zero on the Y-axis (less arm-side movement). It stands to reason that a fastball with less fading movement would be easier to pick up on for an opposite-handed batter. It's a theory anyway, but one that fits with what we know about platoon splits.

The reason the fastball-changeup combination works is because the batter doesn't have a good heuristic to use during the half a second the pitch is en route to determine, to put it simply, if the pitch is a fastball or a changeup. The perfect combination, as we hear so often on broadcasts, is to have the same delivery of both pitches and then just have the changeup come in surprisingly slower. As the fastball's delivery arc changes, because it is being thrown straighter, a separation between the two pitches becomes more evident, and the pitcher loses his advantage as he tries to get the batter out.

The other avenue we need to explore is the home runs, which are the overwhelming factor in Matusz's defense-independent performance cliff-diving in 2011.Unfortunately, here we enter the realm of the small sample size and the fiefdom of varying factors. Matusz gave up 12 home runs to right-handed batters in 2011, which was a large increase percentage-wise: a normal performance for him would have been allowing five homers. While it is significant that his long-balls doubled and then some, that is still just seven pitches more than normal to try and isolate out from the nearly 1500 he threw in 2011.

Additionally, consider the number of factors involved in producing a home run. There's the batter and his strengths and weaknesses, the stadium, the weather conditions to some degree, and then there's the pitcher. For what it's worth however, the 12 homers he allowed to righties in 2011 came on the following pitches:

Five of the fastballs were thrown under 90 MPH during June 2011. The other seven home run pitches were thrown in August and September. It stresses, despite my complaints of the frequent reliance on the radar gun, that without his fastball velocity Brian Matusz is a terrible pitcher. But it also stresses that with his fastball velocity but without his command of the pitchers, he is still a terrible pitcher.

As Brian Matusz heads out to the publicly Pitch F/X equipped major league stadiums, we should keep an eye out for his fastball command against right handed batters. While the velocity is certainly a big part of the equation, and a dip in speed would be a harbinger of doom, let's not over-rely on that information. We have seen that Matusz can be wildly unsuccessful despite his usual velocity.

Instead, let's use the radar readings in a larger context of how his pitches are working, and how many swings and misses he can induce with his fastball, and then how that feeds into the way he works his other pitches. Brian Matusz is a terrifically skilled pitcher and should be fascinating to watch and root for. Let's not reduce him to just a number on a radar gun.