While we won't know who won last week's contest until later tonight, I'm happy to announce that we're starting a new Pick 6 contest for the week that begins tomorrow and ends Sunday, May 20th. Just like we did last week, I'll be keeping track of the weekly and daily leader boards. At the end of the week the player with the highest cumulative score for the week wins one prize, and the person with the highest single day score will also win.

What's the prize, you ask? Well it's this groovy Pick 6 shirt: 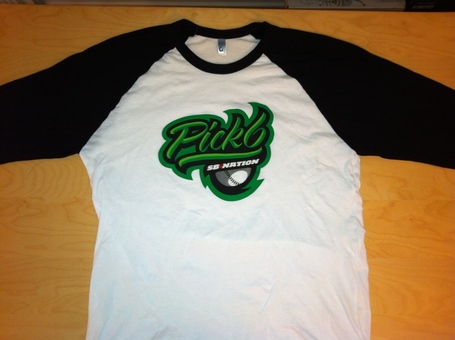 You know you want it! So get to picking! I'll be posting a daily update with the weekly leader board and the status of the current daily leader.

SB Nation is providing the prizes for this weekly contest, and we're going to do it every week for four weeks. They'll be handling the doling out of the t-shirts so you know it'll be all professional-like. You can check out the official rules here. Good luck! Picks for tomorrow's games are due in by 7:05 p.m. EDT.