[Cross-posted to the Times of Israel]

Yesterday was bracketed by baseball. My kids and I watched the last few innings of the Orioles’ 15-inning win over the Royals over breakfast, and then I caught the second half of their 5-3 win over KC late in the evening. The 8-hour time difference between Israel and Missouri created a bizarre sort of day-night double-header.

It has not always been so easy to follow the O’s, or any other team, from this far away. When I first got to Israel for a year of study in the summer of 1993, only one local newspaper, the Jerusalem Post, had an international sports section, but it was small, New York-centric, and I would only see it on weekends, if at all. Friends and I would occasionally receive the sports section of local papers in the mail, but by the time they arrived they were several weeks old. Phone conversations to the States were infrequent and expensive enough to make it impractical to talk sports on those occasions. To top it all off, I was in a religious studies program where baseball was simply not a priority. There was no baseball when I returned home in the summer of 1994, so by the end of my second year studying in Israel in the summer of 1995, it had been nearly two seasons of barely following the O’s, and my interest in the sport had waned significantly.

But that summer was the countdown to Cal breaking Gehrig’s Streak, and by the time it was over, I had been drawn back in. The Orioles were relevant again during my college years, and by the time my wife and I moved to Israel in the summer of 1998, the internet had made it much easier to follow the team from across the pond. Over the next few years, it became possible to listen to watch and listen to games over the internet, and so I became a subscriber to the MLB audio package (and occasional Slingbox user). For just a few dollars, I get to listen to a few dozen games a year (the average 7:05 start time is 2:05am over here), though it would prove to be a frustrating enterprise.

Earlier this week, Gary Rosenblatt – an Annapolitan and a leading Jewish journalist – posted his reflections on four generations of his family’s baseball fandom: two generations of O’s fans bookended by fans of New York teams. I suppose I’m fortunate in that I know my kids will not stray from the team whose fandom they inherited (though one son, who was born in Dallas during our 2-year stint there, has chosen to be a Rangers fan; can you blame him?). Kids growing up in Israel with no local team to root for, if they become baseball fans at all in a country where soccer and basketball reign supreme, will generally follow family tradition. Following baseball has even become a primary way that we American expats give our kids some American culture.

So now, every morning, my 11-year-old daughter wants to know what the O’s did first thing in the morning. Last season she experienced the frustration of being an Orioles fan (while developing a crush on Mark Reynolds); this year she has started to experience its joy (while shifting her attentions to JJ Hardy). My Ranger-fan son plays little league now, and smacked a 3-run double in his latest game. 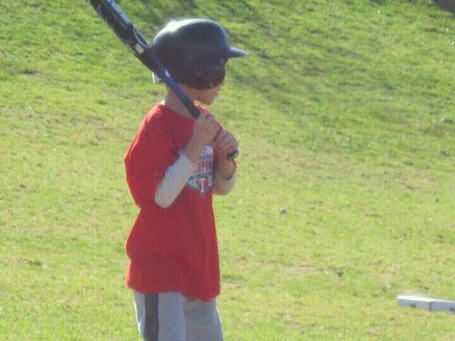 [In the on-deck circle and representing the Rangers]

The next son down has become an Orioles fan, too, though when he’s angry at me he’ll tell me he likes the Red Sox. They will all often join me in watching or listening to games (I’m still partial to radio) during their waking hours, and we watch highlights from the night before over breakfast. Even my 2-year old will walk over to me in my home office and ask to watch baseball highlights. And most recently, I started teaching the basics to nieces and nephews whose Israeli fathers do not know the game. 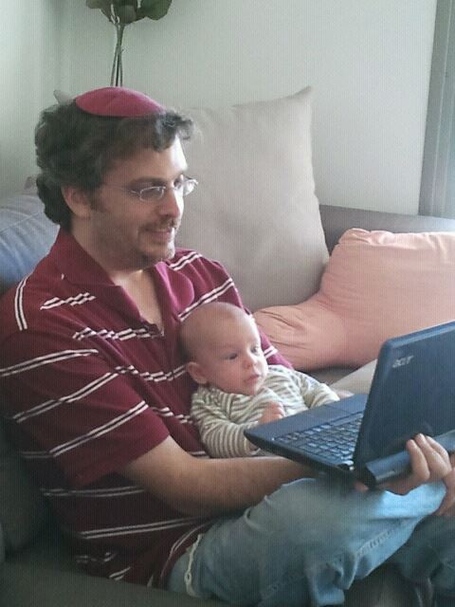 I guess I'll be their eccentric immigrant uncle who teaches them about the folkways of the Old Country.