The View from ZKnower's Seat

Share All sharing options for: The View from ZKnower's Seat 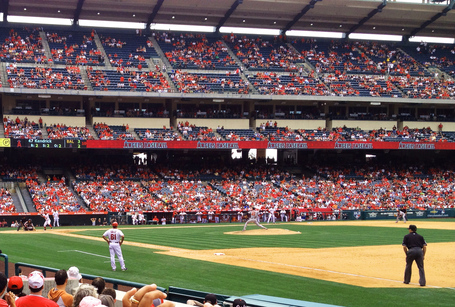 Taken on April 22nd as Jim Johnson struck out Howie Kendrick to end the game and salvage one win in Los Angeles.
There's commentary on this game from zk below the jump.
The seasoned observer will note that this picture perfectly captures everything that sucks about Southern California baseball.
It was a gorgeous Sunday afternoon, and thanks to a hat promotion, attendance at the stadium was over 38,000 people.
And here we see that the game went into extra innings! FREE BASEBALL!! The home team is down by only one, it's the bottom of the tenth, there are two outs, and the tying run is 90 feet away in the persona of Bobby Abreu, who pinch ran for Kendrys Morales after the latter doubled with one out. WHAT WILL HAPPEN? The stadium is GOING WILD, the FANS ARE ON THEIR.......
Oh wait a minute. The stadium is practically empty. Hmm.
As you can see in this picture, much of the Anaheim fanbase didn't give a rat's ass what might happen in the bottom of the tenth.
Is it because they left in the top of the tenth, when the Orioles strung together a walk and some productive outs to pull ahead by a run?
No. It's because they left in the 7th inning when the Angels were up 1-0. Classic.