With all the hullabaloo over the Adam Jones contract extension coming from Oriole Park at Camden Yards this morning, there was not a shortage of positive vibes for the Orioles to see spill over into today's game. A nice-sized crowd of about 33,000 turned out to see their first place Orioles and the new $85.5 million man. There was a buzz in the air and a good bit of excitement. Absolutely none of this good karma made its way onto the baseball diamond at any point, so what the parties involved got instead was a letdown 4-2 loss to close out a 2-4 homestand that saw back-to-back series losses, including losing two of three to these Royals.

The big story of the game was the failure of the Orioles offense to get any kind of significant damage against Royals starter Luke Hochevar, who, in terms of ERA, has been among the worst starters in all of MLB this season. Entering today's action with a 6.61 ERA, he is precisely the kind of pitcher you need to score runs against. Hochevar was chased fairly early, 4.2 IP with 7 hits surrendered, but he only gave up two runs (one earned) in that time, and then five Royals relievers teamed up to blank the Orioles for the rest of the game.

If there's one bit of silver lining today, it's that Brian Matusz had a decent outing. He wasn't great, but he didn't fall apart either. He made it through six innings with three earned runs surrendered. One unearned run scored in part due to Jones overrunning the ball on a routine single to center, letting a runner on second who later came around to plate a run. Of the others, one came on a Billy Butler home run (curse you, Butler!) on a good pitcher's pitch. Matusz came down and in with a fastball. There was not any kind of hanging meatball. Butler turned on it and golfed it out into the left field seats. Sometimes good hitters just do amazing things.

Other runs also scored that had much less to do with good hitters doing amazing things. Matusz surrendered another solo home run to Jeff Francoeur on a pitch that, as the announcers might like to say, "he wished he could have back." And when you're giving up hits to the likes of Alcides Escobar and Humberto Quintero, well... actually, I don't want anyone to be down on Matusz for today. Pitching is hard. Baseball is hard. He wasn't dominant today, but he was OK enough for most of the time. He avoided big innings and he ultimately notched the quality start, his fifth in his last seven starts - five more than he had all of last season.

Unfortunately for Brian and for the Orioles, the bats were mostly silent today, and the Orioles lost their fifth game out of their last seven.

We might say it wasn't so much a lack of offense for the Orioles that did them in as much as it was a lack of timely offense. They were not without opportunities in the game - a total of eleven at-bats with runners in scoring position. But in the game they only managed one hit with RISP, a Xavier Avery single in the 4th inning when Robert Andino was standing on third base.

That single was a nice piece of hitting by Avery: with an 0-2 count, Hochevar tried to come inside on him and he had great bat speed to get to the ball and knock it into right.

Take out that single and the O's were 0-10 with RISP. Of course, the Royals themselves were only 1-8, but when you get a couple of solo home runs and the other team only scores two runs, that's all you need.

Nick Markakis drove in the other Orioles run in the first inning when he doubled and scored J.J. Hardy from first. Hardy was the only Oriole to reach base multiple times in the game, with a pair of base hits. He also reached in the ninth inning when a collision between Royals second baseman Johnny Giavotella and right fielder Francoeur on a pop-up left Hardy standing on second base. That play brought up Markakis with a chance to extend the game - the O's were down to their last out. Markakis worked a full count before being called out on a pitch off the outside corner. What else is new?

It's not why the Orioles lost the game today, but I'd like to give you a thousand words about the strike zone (in the form of a picture): 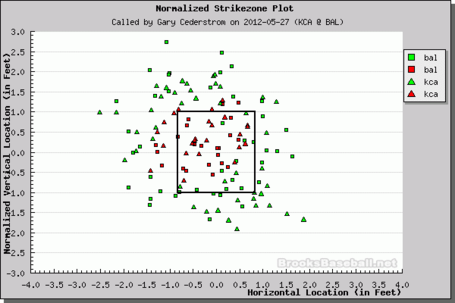 The above image comes from the Strike Zone Map tool on brooksbaseball.net. Squares are pitches thrown by Orioles pitchers, triangles are pitches thrown by the Royals. Only called balls and called strikes are on this map. Green is a ball and red is a strike. The black box is the strike zone. So green in the box - especially in the middle of the box - is bad, and red outside of the box - especially far outside - is also bad. Rough day at the office for plate umpire Gary Cederstrom.

After this homestand, the Orioles are heading off on a three-city road trip that begins tomorrow night at 7:07pm against the Toronto Blue Jays. This is where they need to right the ship a bit and keep the skid from continuing. Probable starting pitchers are Drew Hutchison for the Jays and Tommy Hunter for the Orioles. I guess that's not the best way to go about righting the ship, but maybe Tommy will find some Birdland in the water up there in Ontario.