Orioles 3, Angels 2: Birdland Fields, Where Nothing is Real

Share All sharing options for: Orioles 3, Angels 2: Birdland Fields, Where Nothing is Real

In honor of Luis Hernandez, the most birdland player is not the most valuable player, but rather the most unexpected player who contributes in a significant way. Tonight, the Orioles fielded two birdland players - Miguel Gonzalez and Steve Pearce. After cruising through AAA hitters at Norfolk earlier this year with an impressive 10.7 SO/9 rate, Gonzalez made his first start after three impressive relief appearances for the O's. He continued his strong performance by limiting the Angels to one run in seven innings. Mark Trumbo hit a solo home run in the fourth inning for the Angels' only run. Tonight's performance should seal a temporary spot in the rotation for Gonzalez as he struck out 6 hitters and gave up only three hits. Who the hell is this guy? He was signed by the Angels in 2004 at the age of 20 as an amateur free agent. He then spent the next two seasons as a reliever for the Angels before becoming a starter in 2006 at AA Arkanasas. The Angels then released him and he spent the next two years as a double agent for S.H.I.E.L.D. before the Red Sox picked him up in 2010. The Red Sox let him go after two seasons of distinguished mediocrity before Dan Duquette signed him as a free agent this past March. I don't know what happened to Gonzalez between last year and this year, but a light has turned on for him. Whether that light remains on for 2-3 months or the next 4-5 years, I don't know, but he's been a sneaky good pick up. In the 7th inning, Gonzalez ran into a little trouble as he walked the lead off batter promptly leading the pen to get up. But he then induced a fly out from Alberto Callaspo and a double play grounder from Howie Kendrick to finish out his night.

Steve Pierce gave Gonzalez the win by hitting a game winning, three run homer in the fifth inning. The inning started with a single by Wilson Betemit and a walk by Mark Reynolds before Pearce hit a Earl Weaver special on a full count off of OC native CJ Wilson. Team Steve is pretty much the definition of a replacement level player. He spent the last five seasons doing a whole lot of nothing with the Pittsburgh Pirates. But tonight his homer drove in all of the O's runs which turned out to be just enough for the win. So Team Steve, please put a bird on the Angels' cutesy give away tonight. 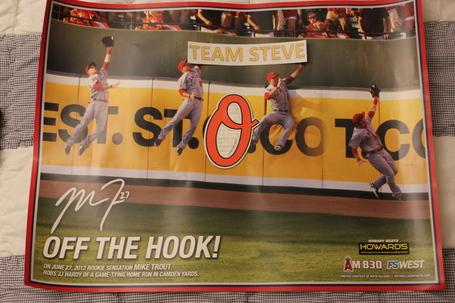 Otherwise, CJ Wilson pitched a strong a game by scattering four hits across seven innings. Wilson never looked dominant but he did a good job of mixing up the speed of his pitches throughout the night. I suspect he relied on a slider and a curve during the early innings before working in his fastball gradually during the second and third times through the line up. Wilson was almost off the hook for the loss as the Angels threatened in the 8th. Mike Trout continued playing Bugs Bunny baseball by blasting a solo wheel home run off of Darren O'Day. O'Day then gave up a triple to Torrii Hunter before Troy Patton came in and retired Kendrys Morales to preserve the lead. In the ninth, Jim Johnson earned his 26th save by inducing a couple of ground ball outs and a fly out. The only thing that kept the O's from earning a textbook Weaver win was the base running mistakes. Wilson picked off both Mark Reynolds and the X-Man in the second and third innings respectively. Tomorrow Jason Hammel takes the bump as the O's try to secure a series tie.