Reggie Jackson's Year in Orange and Black: A Lost Classic

Cliff Corcoran unearths a season that should be better appreciated with the help of a few baseball cards that don't exist, but should.

If you buy something from an SB Nation link, Vox Media may earn a commission. See our ethics statement.

Share All sharing options for: Reggie Jackson's Year in Orange and Black: A Lost Classic

Reggie Jackson's lone season with the Baltimore Orioles seems like a lost season, lost not in the sense of being wasted but in the sense of having been trapped by history, like Orson Welles' original cut of The Magnificent Ambersons or the Beach Boys' Smile.

The nature of Jackson's detour through Baltimore between legendary tenures in Oakland and New York is, in fact, quite unique in baseball history. Jackson turned 30 on May 18, 1976 making him one of a mere handful of inner-circle Hall of Famers to spend a single season during their prime with a team they never played for again. The closest comparison is probably Ivan Rodriguez's lone year with the Florida Marlins at the age of 31, but Rodriguez's 2003 season in Florida was iconic. Rodriguez recorded the final out of the Marlins' Division Series win over the Giants on a collision at home plate that is still replayed with regularity, drove in the first run after the infamous Bartman incident in the eighth inning of Game 6 of the National League Championship Series against the Cubs, and was arguably the best player on a team that went from a losing record in 2002 to winning the last World Series game ever played at the old Yankee Stadium in 2003.

Jackson, whose career was full of iconic moments, had none in Baltimore. In a dozen seasons from 1971 to 1982, Jackson's teams made the playoffs ten times. Of the two exceptions, one was his lone season in Baltimore. In fact, 1976 was the only season between ‘71 and '78 that the man known as Mr. October didn't appear in the postseason, something made all the more remarkable by the fact that the Orioles themselves had participated in five of the previous seven postseasons and would win the AL East again in 1979, the only one of Jackson's five years in New York that his Yankees didn't take the division crown.

That was no fault of Jackson's. He had a representative prime-era season in 1976, hitting .277/.351/.502 with 27 home runs and 91 RBIs, leading the O's in homers and OPS (.853) and the league in slugging and OPS+ (155). Jackson also led the Orioles in stolen bases, swiping a career-high 28 bags in 35 attempts at a strong 80 percent success rate. In fact, Jackson's one season with the Orioles was better than all but one of his five seasons with the Yankees, and the circumstances of his arrival were no less sensational.

On April 1, 1976, Reggie Jackson was still a member of the Oakland A's. It wasn't until the next day, exactly a week prior to Opening Day, that A's owner Charlie Finley, knowing he couldn't afford to re-sign the pending free agent that fall, shipped Jackson, lefty starter Ken Holtzman, and a minor leaguer to the Orioles for outfielder Don Baylor, and right-handers Mike Torrez and Paul Mitchell. Stunned by the swap and already dissatisfied by his salary for the coming season, Jackson refused to report to the Orioles until the team agreed to increase his salary from $165,000 to $200,000, missing the first 16 games of the season in the process.

Jackson's first game with the Orioles was the nightcap of a home doubleheader against the A's. The Orioles had gone 6-10 without him, averaging just 2.4 runs per game. They then won 12 of their first 16 games after Jackson's arrival, averaging 4.8 runs per game, though Jackson hit a mere .229/.345/.438 over that stretch. In June, when Finley's sale of stars Vida Blue, Rollie Fingers, and Joe Rudi to the Yankees and Red Sox for cash was voided by commissioner Bowie Kuhn, Jackson and the Orioles slumped, with the O's falling into fifth place, ten games back with a 34-37 record by the end of the month, and Jackson waking up on the morning of Independence Day hitting a mere .222/.295/.414.

From there, however, everything started to come together. From July 11 to 23, Jackson homered in eight of ten games, tying an AL record with homers in six straight games to end that stretch. From July 8 through the end of the season, the Orioles went 52-32 (.619) and Jackson hit .313/.388/.560 with 19 home runs in 338 plate appearances from July 4 through season's end. Still, because of their slow start, both without and with Jackson, the Orioles never got to within six games of first place and finished in second place, 10 ½ games behind a Yankees team that brought postseason baseball back to the Bronx for the first time in a dozen years.

In an odd quirk of history, Jackson was in the Bronx as well that October, joining Howard Cosell and Keith Jackson as a color commentator for ABC's broadcast of the ALCS between the Yankees and Royals. Still technically a member of the Orioles, his most telling comment during the memorable fifth game of that series came after Cosell informed viewers that Yankee owner George Steinbrenner called Mickey Rivers into his office for a talking-to after Game 4.

"Always amazes me how somebody that's never played the game can tell somebody how to play it," said Jackson in dismay.

"I'll keep it in," chuckled Jackson.

"Gonna have to," replied Cosell.

"Don't come down to the Oakland clubhouse or the Baltimore clubhouse and tell me what to do," warned Reggie, both foreshadowing his future relationship with Steinbrenner and tellingly adding Baltimore only as an afterthought to Oakland.

Granted free agency on November 1, Jackson spent just six months under contract to the Orioles and signed with the Yankees less than a month after being given his freedom. By comparison, he had been a Yankee for four months before playing his first game for New York. Among other things, that allowed Topps, which, at the time, had a monopoly on the baseball card market in the United States, to paint a Yankee uniform on Jackson for his regular-issue 1977 card, effectively airbrushing his Orioles season out of the collective memory.

That, as much as anything else, has helped create the sense of Jackson's 1976 campaign as a lost season. Jackson's air-brushed 1977 Yankee card (which used a photo of Jackson with the A's as its source image, note the green-and-gold sleeve of a teammate over his right shoulder) has become iconic in its own right, while Jackson never appeared on a Topps card as an Oriole.

Actually, that last isn't exactly true, for two reasons. The first is that Jackson can be seen in an orange, number-nine jersey in the team photo on the front of the Orioles' checklist in the 1977 set (middle row, far right): 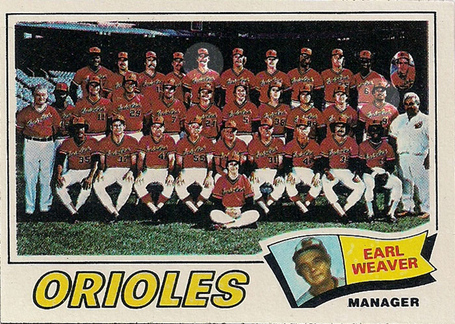 The other is that Topps did produce a proof of a card with Jackson in an Orioles uniform before swapping the photo out for the airbrushed one. Eight of those proof cards are known to be in circulation, one of them owned by Keith Olbermann, who did Orioles fans everywhere a favor by posting a high-quality scan of his card on his MLB.com blog two years ago. Here's Olbermann's card: 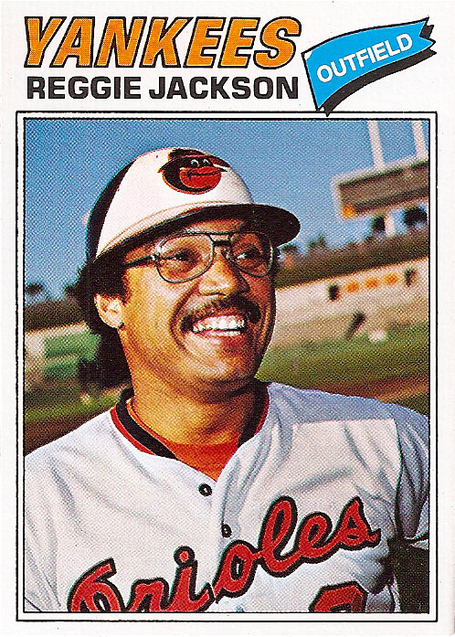 You'll note that, despite the uniform, it's still a Yankees card. However, with that image, my own 1977 Topps set and a little Photoshop work, I've been able to create the card that should have been, Reggie Jackson's 1977 Orioles card: 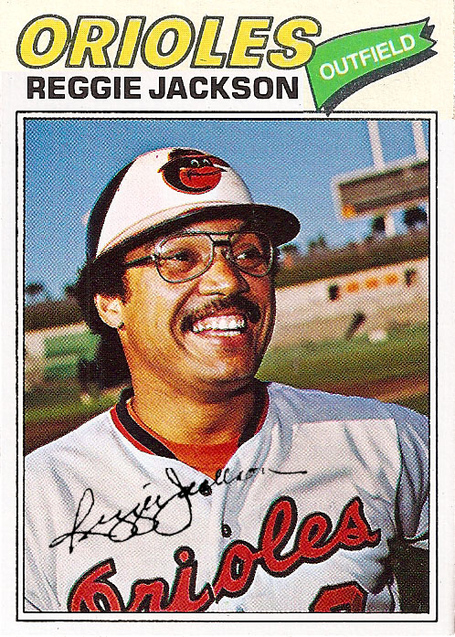 It's not The Smile Sessions, but, for baseball fans, it's close. While I was at it, I made a 1977 Orioles card for Bobby Grich as well (he's the other player I put in a spotlight in the team photo above). Also a free agent that fall, Grich signed with the Angels five days before Jackson, with whom he'd later be reunited in Anaheim, signed with the Yankees and just eight days after the Angels signed Baylor. As a result, Grich's regular-issue 1977 Topps card shows him on the Angels (with no hat, but an air-brushed navy-and-red collar). In fact, because Grich appeared without a hat on his 1976 card as well, there never was a Topps card of Grich in the white-front Orioles caps that the team brought back last year and first wore in 1975. This is my attempt to rectify that: 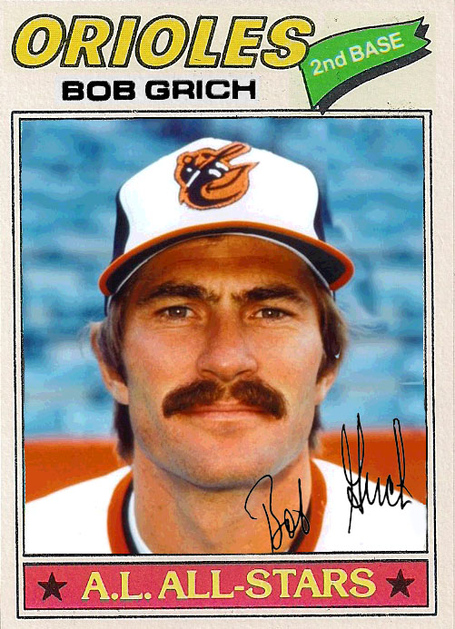 As it was for Jackson, 1976 was a season of transition for the Orioles. Brooks Robinson ceded the third base job to Doug DeCinces. Paul Blair relinquished the center field job to Al Bumbry (with Jackson occupying the position for part of May). Mike Cuellar pitched his way out of the starting rotation while Dennis Martinez made his major league debut and Mike Flanagan got his first significant major league exposure. Holtzman was traded to the Yankees on June 15 in a ten-player trade that brought Scott McGregor, Tippy Martinez, and Rick Dempsey to Baltimore, each of whom would spend more than a decade in orange and black. In November, free agency would rob the Orioles of their two best hitters, Jackson and Grich, thrusting Ken Singleton into a leadership role on the team and setting the stage for the arrival of Eddie Murray.

The 1976 Orioles won 88 games. In the 13 full seasons in Earl Weaver's initial stint as Orioles manager, they only won fewer once. In 1977, with Murray in the lineup, Flanagan in the rotation, and the 30-year-old Singleton having his finest season, they won 97. They then packed up their lockers and watched the 100-win Yankees win the World Series with Jackson delivering his most iconic performance, three home runs on three pitches, in the clincher.