If the Orioles are to contend for a title next year, they will have to upgrade their starting rotation, or so the narrative goes. They can score plenty of runs, but they can't prevent the other team from scoring, and that has held them back. In this case, the Orioles' rotation was, in fact, unsatisfactory, finishing with the 4th-worst ERA (4.57), the 9th-fewest innings pitched (939.0), and the 7th-lowest fWAR (7.4).

One member of the rotation was particularly disappointing: Wei-Yin Chen, the second-year pro out of Taiwan. After putting up a respectable rookie season (192.2 innings, 4.02 ERA, 2.2 fWAR), Chen was expected to improve in 2013 and carry the Orioles back to the playoffs. This did not, however, come to fruition, as Chen missed nearly two months with an oblique injury, and was not much better when he did pitch (137.0 innings, 4.07 ERA, 2.0 fWAR).

A layperson would look at Chen's splits for the season and conclude that he got worse as the year went on. This would certainly seem to be the case: 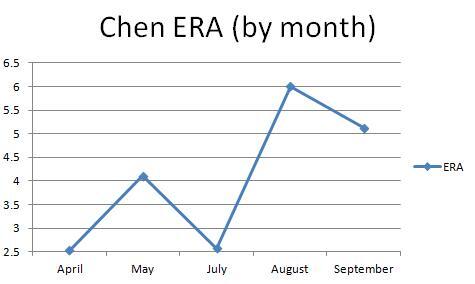 After posting phenomenal ERAs in April and July (sandwiching a mediocre May), Chen was putrid in August and September, as he put up ERAs of 6.00 and 5.12, respectively.

As you've hopefully deduced by now, I am not a layperson (at least in regard to baseball). I am erudite enough to know that ERA is a very poor indicator of how well a pitcher actually pitched, and that other stats should be used instead. The best stat to use is SIERA, which uses a variety of factors to evaluate the talent of a pitcher. This is where things begin to get interesting, as Chen's SIERA splits paint a very different picture: 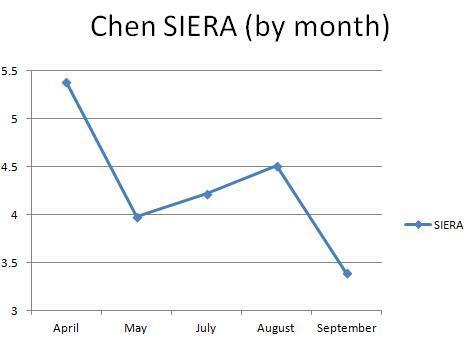 Chen's SIERA was actually highest in April--i.e. the month when his ERA was the lowest. For the next few months, it was middling, ranging from 3.98 in May to 4.51 in August. And then along came September. In the season's last month, Chen pitched better than he had all year, and his SIERA (3.39) reflected that; as a point of reference, Hisashi Iwakuma, he of the 2.66 ERA and 4.2 fWAR in 219.2 innings, had a 3.40 SIERA.

What caused this rise from competence to incredibility¹? As I said earlier, SIERA takes several components of pitching into account; two of the primary ones are walk and strikeout rates, as they are defense-independent². How did Chen fare in those regards? 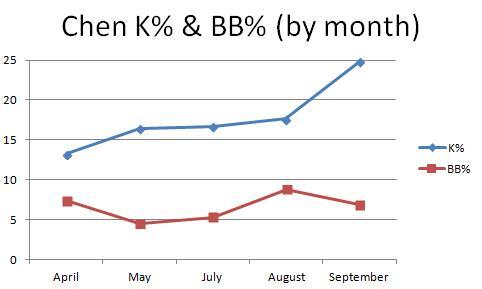 What caused these rates to spike in the season's ultimate month? Let's examine Chen's pitch selection: 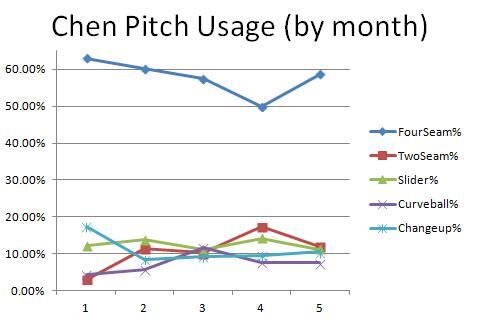 Since it's difficult to discern the percentages at the bottom, here's the table of the values³:

What does this tell us? Not a whole lot. Compared to August, Chen's usage of the four-seam fastball was up, but it was still lower than in April or May, and fairly similar to his implementation for the season as a whole. The opposite can be said for the two-seam fastball and slider--while they were both thrown less frequently in September, their usage was basically in line with the end-of-year averages.

Perhaps the graph and chart of Chen's velocity will offer some explanation: 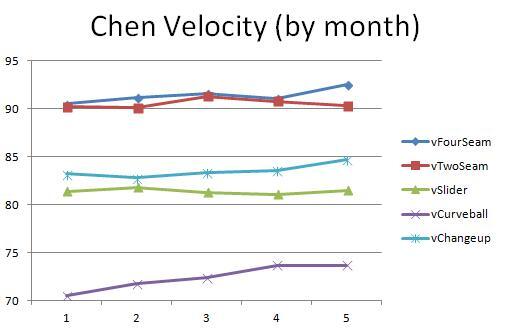 Now we begin to gain a bit of clarity. Chen's velocity on his four-seamer and changeup were a full mile per hour faster in September than in any other month; furthermore, the curveball improved for Chen as the season went on, to the tune of a three MPH uptick. As we painfully learned from Jason Hammel's devolution this past season, the difference of a mile per hour on a pitcher's primary pitch can have huge ramifications, so an increase of this size is nothing to sneeze at.

The increased usage of the four-seam fastball and changeup in September makes more sense now, as their upgraded velocity would have (or should have) made them more effective. Likewise, the lesser reliance on the two-seam fastball and slider could be attributed to their plateaued speeds. Through these seemingly trivial changes, it's entirely possible that Chen was able to elevate his game.

What should be taken from this? As Mark Brown brought up on Monday, the Orioles' payroll is already going to increase over last year, which means they'll have to spend their limited free-agent budget carefully. While this might just be a random fluctuation, it also could be a sign that Chen has turned the corner, and that money spent on a rotation upgrade could be better spent elsewhere. If this trend continues into 2014, the rotation, once a weakness, could become a serious strength.

²Well, for the most part.

³The percentages might not add up to 100; if this is the case, it's due to intentional walks, which are included in the total pitch count but not in the pitch-type percentages.