Who might the Orioles go after in free agency to shore up the starting rotation?

Share All sharing options for: Orioles rotation 2014: What free agents make sense for the Baltimore Orioles?

If the Baltimore Orioles want any hope of contending in 2014, they have got to improve their starting pitching. Their starters allowed an average of 4.38 runs per game in 2013, worse than the league average (4.29) and the worst of any team with a .500 or better record. Yesterday Mark Brown discussed internal options to round out the starting rotation (assuming Chris Tillman, Wei-Yin Chen, and Miguel Gonzalez are locks) and tomorrow Kevin Ebert will have an article on possible trade targets. Today we'll discuss free agents. 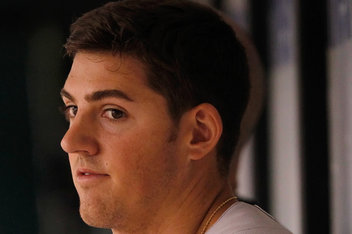 When I began writing this article I wasn't sure if I should write about the best free agents out there (because that would be more fun) or the pitchers the Orioles are most likely to sign, if they sign anyone (because that would be more realistic). I decided to go with the latter, because it just makes more sense. If you don't like the names on this list, don't shoot the messenger. I'm simply using my experience with the Orioles to try and determine what is realistic.

The thing about the Orioles, and something any O's fan can tell you, is that that they don't spend a lot of money on starting pitching. There has been a recent trend by the Orioles of giving players out of the Japanese league (Koji Uehara, Wei-Yin Chen, Tsuyoshi Wada) multi-year deals, but other than that you have to go back to Sidney Ponson's three-year, $22.5M contract signed in 2004 for the last time the Orioles signed a free agent pitcher to a multi-year contract. Hm...maybe ol' Sidney scared them off. I could certainly understand the sentiment.

So what I'm getting at is that the Orioles probably aren't going to go out and sign a player like Matt Garza or Ervin Santana, both of whom MLB Trade Rumors predicts will get contracts of at least four years. Likewise they are not expected to go after big name Masahiro Tanaka out of Japan, whose posting fee is expected to exceed the $51.7 million it took for the Rangers to get for the rights to negotiat with Yu Darvish. Maybe they'll surprise us and use some of the money that makes them the seventh most valuable baseball franchise, but until the day that actually happens, it doesn't seem feasible to me to expect the Orioles to go after any big names. So who might they get to solidify their rotation in 2014?

Traded to the Orioles from the Cubs for the playoff push, Scott Feldman is considered likely by many to return to the Orioles. He pitched decently while he was in Baltimore and both sides have expressed interest in staying together. Feldman will be 31 years old in 2014 and has been pretty much your league average pitcher in his 234 career games. It is expected that Feldman will get at least two years in his next contract, but if the price goes up to $17 million he may end up being too expensive for the Orioles.

Just a year ago, it seemed that we'd never see Scott Kazmir again. He hadn't pitched in the majors since he made one start for the Angels in 2011, and he spent 2012 pitching for the Sugarland Skeeters. In a Duquette-like move, the Indians picked him up and gave him a chance. He got his velocity back and ended up having a very successful season in Cleveland. If some team is willing to give Kazmir a multi-year deal, I hope it's not the Orioles. He looked simply terrible his last go round in the majors, and who knows if he has another good year in him. But if he can be had on a one-year deal, he might be an interesting pickup.

I wouldn't be happy if the Orioles signed Jason Vargas, but I probably wouldn't be surprised either (depending on the contract he gets) Like Feldman, Vargas has made a career of being not crappy. His claim to fame is that he pitches a lot of innings. He only pitched 150 innings in 2013 due to a blood clot, but in the three years prior he averaged just over 200 innings pitched per season. I don't like Vargas for the Orioles because, in addition to just being just OK at pitching, he has been a fly ball pitcher over his career. When a pitcher give up home runs at a rate of 1.2 per nine innings in Seattle, the idea of him pitching in Camden Yards is a little bit terrifying.

Josh Johnson gets hurt a lot. But when he's not hurt, he's generally a good pitcher. He's coming off of a terrible season with the Blue Jays and, at 30 years old, will probably end up with a one-year contract to try to build up his value for the future. Johnson would be a wild card, not someone you want to rely on for the rotation, but if he stays healthy and goes back to his pre-2013 form he could give the Orioles a lot of value in 2014 without much commitment or a crazy salary.

Truthfully, I can't really see the Orioles signing Ricky Nolasco. He'll probably get a three-year deal from someone, and I still can't imagine the Orioles giving a three-year deal to anyone (who isn't coming over from Asia). But he is probably the highest tier starting pitcher that could even possibly become an Oriole. Nolasco spent his entire career with the Marlins before being traded to the Dodgers mid-season. Nolasco is a ground ball pitcher, which would go well in Camden Yards, and he doesn't walk a lot of batters, which is of course a plus. He has a history of success while being just 30 years old, so he's the right age to give a multi-year deal to, if the Orioles were so inclined.