Just how successful have the Orioles been in developing starting pitching relative to the league?

Share All sharing options for: Homegrown Starting Pitching in the Peter Angelos Era

How successful are the Orioles at developing starting pitchers since Peter Angelos took over? This question has urgency for O's fans, with Brian Matusz, Jake Arrieta, Zach Britton, Dylan Bundy, and Kevin Gausman -- all of whom were drafted by the Orioles -- in various stages of our development system. As a gut feeling, it's tough for me to be optimistic, but I wanted to see the data for myself.

To do this, I searched baseball-reference.com for AL East pitchers who meet all of the following criteria:

The following pitchers qualify for the Orioles:

Four pitchers?! I was pretty shocked to see such a small number. Then I looked at this number in context of the AL East: 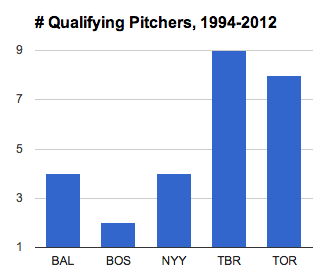 Put in context, the O's are hardly alone in relying on free agents and trades since 1994. New York is in a similar spot, and Boston is in another league (no pun intended) entirely. They have developed only Jon Lester and Clay Buchholz.

Toronto and Tampa Bay obviously stand out, but Tampa Bay did not exist until 1998. This makes their feat even more impressive than it appears in the above chart. How impressive? Let's calculate an average: 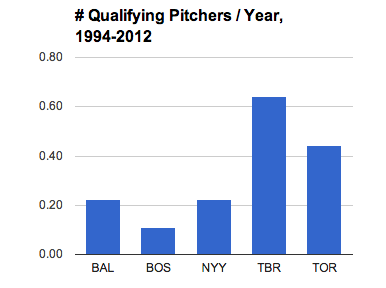 For each year of its existence, Tampa Bay has developed 0.60 starting pitchers. Of course this number is not meaningful in the sense of whole people, but mathematically it shows how far ahead of the competition they are.

If you've got good talent, you want them on the field as much as possible. The following chart shows the number of qualifying seasons, per team, divided over the intervening years -- again, to account for Tampa Bay's late start. 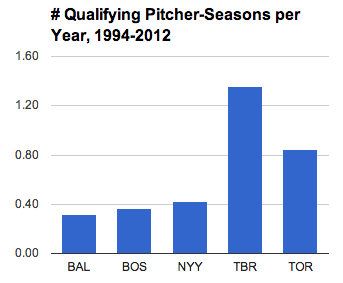 This chart shows how Baltimore, Boston, and New York get, on average, less than a full season of homegrown starting pitching each year. On the other end, Tampa Bay gets more than one season per year out of its homegrown talent. A theoretical maximum would be 5, as in, all five starters in a rotation for a year are homegrown.

Baltimore shows poorly here because we received only six qualifying seasons from our four homegrown starters. Cabrera and Bedard had two each; Bergesen and Matusz had one each. That's not necessarily a bad thing. First, Boston (7 seasons) and New York (8) don't have too many more qualifying seasons. Also, if Bedard had had more seasons for us, we might not have traded him for Adam Jones, Chris Tillman, and (eventually) Mark Reynolds.

What's also notable is that Boston has wrung seven seasons out of just two starting pitchers.

We just looked at cumulative qualifying seasons since 1994. Now, let's break down when those seasons occurred.

Baltimore generally spread out its qualifying seasons, clumping together only in 2007 and 2010. Meanwhile, Tampa Bay and Toronto have stacked many qualifying seasons together, as multiple homegrown starters simultaneously emerge from their minor league systems.

Rolando Arrojo (Tampa Bay), Orlando Hernandez (New York), and Roy Halladay (Toronto) are the relative outliers in the AL East until 2007, when James Shields took the hill for Tampa Bay. After that, Tampa Bay became locked in an arms race (hah!) with Toronto to see who could develop the most major-league starting pitching.

This race has increased the reliance on homegrown starting pitching in the AL East as a whole:

Now's a good time to pause and reflect: homegrown starting pitching isn't everything. Neither Tampa Bay nor Toronto have had World Series success in the time period we're looking at; conversely, Boston and New York have many titles and trophies despite not developing many starting pitchers.

Finally, I used ERA+ (averaged per pitcher per season per team) as a blunt measurement for how good each team's homegrown starters have been. 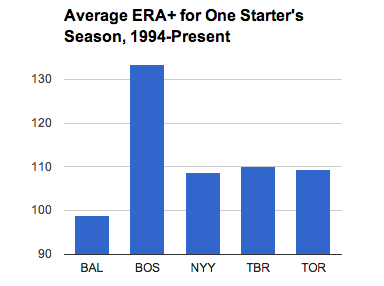 It's clear that Baltimore has work to do in either identifying or developing high-quality starters. When you saw, above, the names of the starters we've developed … you kind of knew a chart like this would show up. Baltimore's homegrown starters average a 99 ERA+ in a season. While Bedard was fantastic in his two years, Matusz, Bergesen, and Cabrera were not in theirs.

This chart also highlights the relative quality of Lester and Buchholz vs. the rest of the league's homegrown starters. But as we all know, quality isn't everything. Tampa Bay has so many good starters, they can often trade from a position of strength. We saw this recently when they used Shields and Davis to acquire super prospect Wil Myers without giving up Price or Hellickson.

Toronto is in a similar situation, except their best homegrown starting pitcher (Halladay) left town a long time ago, and Toronto got far less for him than Tampa Bay did for their starters. However, Toronto did get Travis d'Arnaud, who was recently used to acquire R.A. Dickey from the Mets. And Henderson Alvarez was packaged to the Marlins in return for Mark Buehrle, Jose Reyes, Josh Johnson, and others.

So: what did we learn? By the measures used in this article, the Angelos administration, with its multiple GM and pitching coach changes, has not done well at identifying or developing starting pitchers. This fact should give the rational fan cause for concern when thinking about our current stockpile.

However, the rational fan can also take heart in three places:

With so many baby birds in our system, it's likely that more than one of them will pay off in any of these ways.